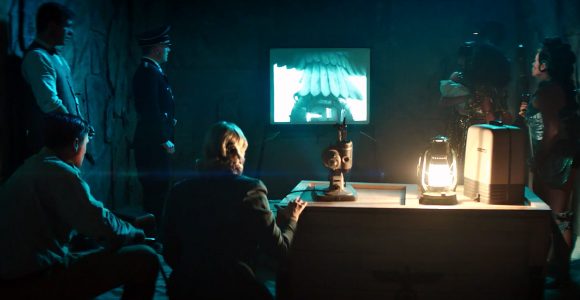 Brücke uses Nazi propaganda to try and sway Aset into an alliance. Catherine tries to convince Kasuf that they are on the same side.

The Goa'uld Aset, ruler of Abydos in Ra's absence, watches with interest as the Tau'ri – humans from Earth – assemble and spin-up their projection device. Dr. Wilhelm Brücke and his favorite propogandist, Eva Reinhardt, showcase the greatness of the German empire in the hopes of winning Aset's respect. The sequence of images features goose-stepping Nazi soldiers marching in formation, powerful tanks and weapons waging war, and the Führer Adolf Hitler addressing the crowds. 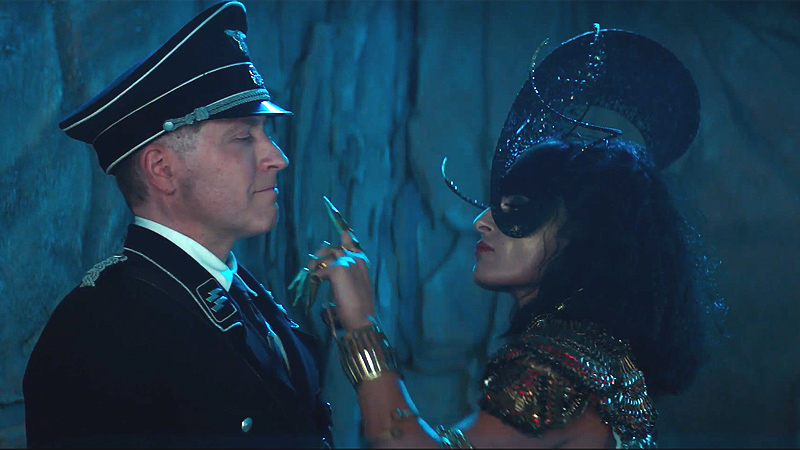 Serqet is uncertain about the entire prospect, not only of the film show but moreover about of her queen forging an alliance with these people. As Brücke promises Aset "strong friends and allies," Professor Paul Langford translates ... with some hesitation.

Aset is desperate for allies, evidently preparing for a coming conflict – an uprising against Ra. She fires his machine gun into the ceiling and is extraordinarily pleased by the results: while they are still primitive these off-worlders clearly have sufficient weapons technology to be effective against the Goa'uld. Brücke promises that she will be loved and worship by the new army he can deliver.

Back in the Abydonian settlement Catherine and Beal argue at Wasif's bedside. Their friend was almost killed in their escape attempt (Episode 5), and James is managing the complexities of his feelings for her and his impatience with her impulsiveness in such a dangerous situation. Wasif awakens, and they update him on their predicament in time for young Kasuf to return. 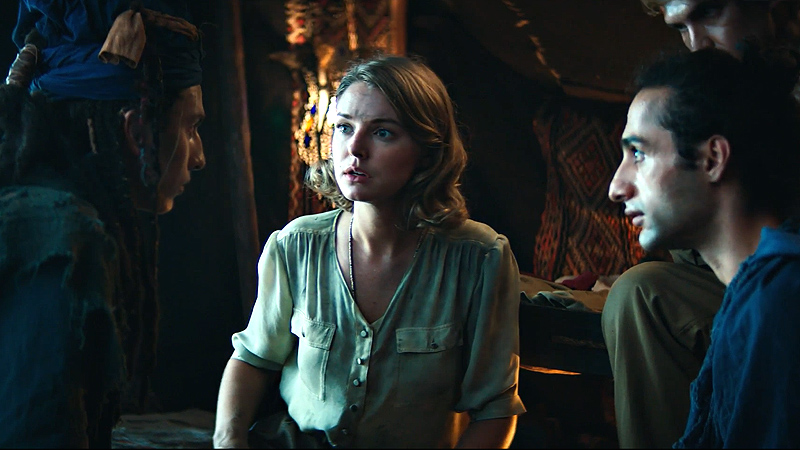 He explains to them that they are prisoners in his outpost, called "Nosdevli." As they struggle to communicate two warriors enter the tent: Motawk, the guard who accidentally stabbed Wasif, and also the large and intimidating figure of Nubai. Whereas Kasuf is friendly and eager to be helpful, these two wish to put on a strong face.

They plan to present their captives to Aset ... until they lay eyes on the Eye of Ra amulet that Catherine wears around her neck (the same one she found as a child, buried with the Stargate). Their entire demeanor changes and they fall to their knees, now convinced that the off-worlders are emissaries of Ra himself.

Back at the temple Aset has clearly made up her mind to strike an alliance. She admires Brücke's swastika pin while footage of Nazi imperialism flickers across the stone wall. Then she sees images of the concentration camps. "Slaves," she says. Langford confirms it with a solemn nod – this is how the Nazis treat those they dominate. Aset recalls that thousands of years ago the Tau'ri were slaves to the Goa'uld but rose up and expelled Ra. Perhaps now ... they are ready to be slaves again.