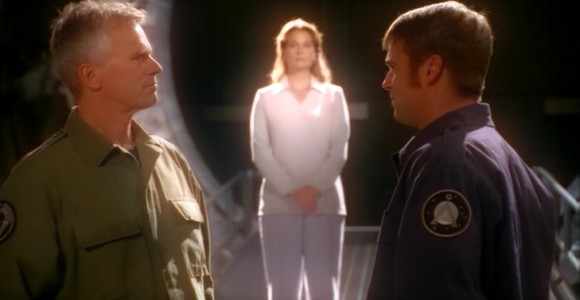 ~ Joseph Campbell, The Hero With a Thousand Faces

For five years, we have watched SG-1 embark on their heroic journeys -- not only through the Stargate, but through their personal lives, as well. In "Meridian," SG-1 suffers their first permanent loss of a team member, when Daniel Jackson is mortally injured preventing a naquadria-powered device from exploding, and killing millions of people. And in a smart bit of multiple episode and character resolution, Oma Desala ("Maternal Instinct") returns to help Daniel ascend, to continue his personal journey on the Great Path that he began on Kheb.

Written by the marvelous Robert C. Cooper, "Meridian" provides an emotional catharsis, not only for the viewer, but also for all the characters involved. And as the drama unfolds, we are allowed to see some unusual role reversals for our characters.

Daniel Jackson has been both student and teacher while with SG-1. As a student, he has learned to defend himself (and his team) with weapons and to act in a situation (and not react). (I found it interesting that Daniel thought to use his sidearm to shoot out the window, so that he could gain access to the lab and stop the explosion.) As a teacher, he has taught Jack (more by example than anything else) the finer points of diplomacy that Jack used in defending his dying friend's honor.

Another example of role reversal was at the second briefing with General Hammond, O'Neill and Carter. It was Jack who was so passionate about saving Daniel at any cost, and Sam who remained pragmatic in regards to the need to obtain some of the naquadria. Only a series with quality of Stargate (in all respects) would prevent their characters from falling into stereotypical responses to an emergency of this nature. (How easy it would have been to have had Sam passionate and Jack the pragmatic cynic.)

And could you have imagined the Jack O'Neill of five years ago arguing against a weapon of mass destruction? It was Jack himself (in "Stargate" the movie) who covertly brought a nuclear device to Abydos, to destroy their Stargate.

Redemption was the central theme of this episode. Daniel felt he wasn't worthy of ascension, because he had never managed to atone for his failures to save his late wife, Sha're ("Forever In a Day"), and his ex-lover, Sarah / Osiris ("The Curse"). It was only after Oma reminded him that the only thing we can truly control is whether we are good or evil that Daniel realized his failings were simply that, and that he could continue his efforts for good more effectively in ascension.

However, as Orlin ("Ascension") mentioned, Oma was possibly banished from "their kind" for breaking one of their more sacred rules -- to not accelerate the natural ascension process of those beneath. Will this have any affect on Daniel's status as an ascended being?

Jonas Quinn (Corin Nemec) started on his path of redemption by listening to Jack's entreaties -- not only about defending Daniel's honor, but also about the dangers of a weapon of mass destruction. Quinn steals as much naquadria as he can and brings it to the S.G.C., thereby branding himself as a traitor to his government and essentially stranding him on Earth.

The acting by our regular cast was extraordinary in this episode. From Daniel Jackson's (Michael Shanks) blunt recital of the progression of the radiation effects on his body; to Sam Carter's (Amanda Tapping) and Teal'c's (Christopher Judge) tearful farewells to Daniel; to Janet Fraiser's (Teryl Rothery) alluding to euthanasia as a possible course of action; to General Hammond's (Don S. Davis) torn devotion to duty; and to Jack O'Neill's (Richard Dean Anderson) fierce attempts to contain his fear, anger, loss and denial.

William Waring, who has worked on the Stargate crew as a camera operator, received his first directorial credit for this episode (according to the Internet Movie Database). His minimal dressing of the ethereal Gate Room is impressive -- the normal equipment lining the walls (including the 50 caliber machine guns) was removed.

My only quibble with this episode was the casting of Mel Harris as Oma Desala (as well as Oma's costuming). Harris came across as too bland in this role, and I admit I was thrown by her appearing in a pantsuit, complete with earrings and a necklace. Unless ... as Daniel was in industrial crisis mode, the bland appearance was meant to be soothing (in contrast to the mystique appearance in "Maternal Instinct").

Goodbyes never seem to be said in science fiction. In the "Stargate" movie, the last line of dialog is from Jack O'Neill to Daniel Jackson: "See you around ... Dr. Jackson." In "Meridian," Jack O'Neill echoes similarly with, "So, what? See you around?" We've been very lucky to know Daniel Jackson, and I know I will miss him as a regular character during Season Six.

Daniel Jackson, and Michael Shanks -- we wish you well on your journey.