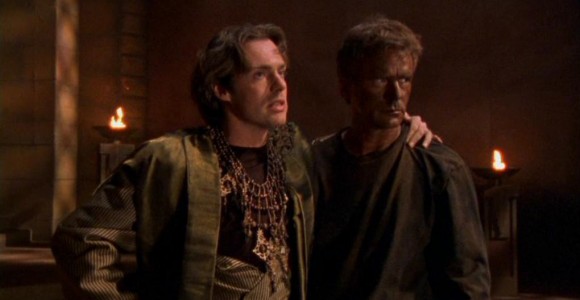 Jackson becomes addicted to the effects of a Goa'uld sarcophagus, and falls for the planet's manipulative princess.

Colonel Jack O'Neill and his team arrive on a new alien world to find a group of Jaffa – soldiers of the Goa'uld – sending the rare element naquadah through the Stargate. Naquadah is the base element for virtually all Goa'uld technology, and is also in part what the Stargates themselves are made out of.

As SG-1 observes the situation from a secluded position, Daniel Jackson hears a noise.Upon investigating, he finds a beautiful woman standing at the edge of a cliff, about to throw herself over. Jackson rushes to her and pulls her back, saving her life. But the event has tipped the soldiers to SG-1's position. They arrive and take the team captive.

In the palace, SG-1 meets Pyrus, the local ruler. He himself is not a Goa'uld, so it turns out: he defeated the Goa'uld who reigned this world 700 years ago. His men now wear the Jaffa uniforms, and Pyrus uses the Goa'uld sarcophagus to stay alive. They continue to send naquadah through the Stargate, for fear that the Goa'uld will learn of their uprising and come in force to reclaim the planet.

The princess, Pyrus's daughter Shyla, does not speak up to confess that Daniel saved her from suicide. SG-1 is taken to the naquadah mine to work. After a day of mining, the dust-covered, weary group makes an attempt to escape. They overthrow the guards and rush for the door. But Daniel is caught when the blast from a staff weapon causes a rock slide, burying him.

O'Neill, Carter and Teal'c return to the slave quarters, but Jackson is taken to the palace. There, Princess Shyla places him into the Goa'uld sarcophagus to heal his injuries and save his life. Daniel is thankful, but wishes to return to his friends. Shyla, on the other hand, tries to convince him to stay with her.

Shyla continues to use Jackson's teammates to manipulate him, because she has fallen in love with him. She convinces Daniel to relax and go back into the sarcophagus – again and again and again. Soon, Daniel isn't acting like himself anymore.

Days go by, and a transformed Jackson goes to visit his friends in the mine. He promises to get them out, but tells them that things are complicated. The Princess wants to marry him, for starters. And when he tells them that he's used the sarcophagus many times, Carter becomes worried. The team has no idea what the Goa'uld healing device would do to someone who is already well.

Carter, having been joined with a Tok'ra Goa'uld, has a remnant memory that the Tok'ra (the Goa'uld resistance movement) do not use the sarcophagus at all, because it somehow drains the good from a person. The word "sarcophagus," after all, means "flesh eating stone." For all they know, the sarcophagus may be one reason why the Goa'uld are as bad as they are – and why Pyrus is as bad as he is.

Finally, Jackson agrees to marry Shyla, but first will return to Earth with SG-1. She believes he will come back to him, because she has gotten him addicted to the sarcophagus. Indeed, back on Earth, Daniel quickly begins to suffer from withdrawal. He is rude, edgy, and ultimately violent. Daniel tries to resign from the SGC and return to the planet, but General Hammond won't allow it.

Jackson reaches the bottom of his rope in going through a massive physical withdrawal. He is restrained in the infirmary, but attacks Dr. Fraiser and escapes. O'Neill tracks him down, and nearly takes a bullet in the process.

Finally, Jackson regains himself, and SG-1 returns to the planet. They find that Pyrus has died – not even the sarcophagus could sustain his body any longer. Shyla is sad, but composed; she knows that Daniel does not truly love her, and is not going to stay with her. Daniel convinces her that she is strong, that she can be a great leader for her people – but first, she must destroy the sarcophagus.