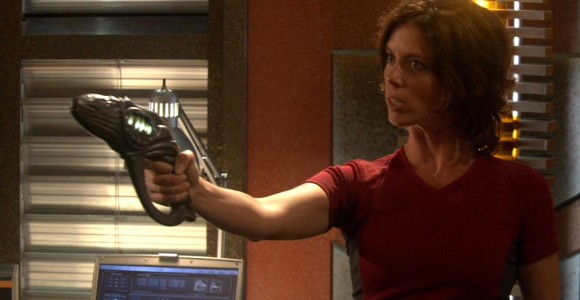 The team discovers two pods that contain the minds of alien beings, who take control of Weir and Sheppard's bodies to continue their personal war.

During a voyage in a Puddle Jumper, Lt. Colonel John Sheppard and Dr. Rodney McKay try to explain television to Teyla Emmagan and Ronon Dex. A proximity alarm alerts the team to two small pods, drifting among the wreckage of a much larger ship in the Kohal System. McKay decides they are just big enough for one person each, but they are not coffins. Sheppard brings the nearest one back to Atlantis and sends another team back for the other pod.

McKay and Dr. Carson Beckett discover that a female is preserved alive inside the life pod. Dr. Elizabeth Weir and Colonel Steven Caldwell give the OK to open it. Both scientists are a little uncomfortable with Colonel Caldwell, who has just returned to duty after being freed from the control of a Goa'uld parasite ("Critical Mass"). Inside the pod is an elderly woman, who is dying. When Dr. Weir leans in to take a look, a bright white beam shoots out and encompasses her. She faints and wakes up in the infirmary, where she begins speaking about Weir in the third person when she wakes up. Obviously, the alien is talking, not Elizabeth. She tells them her name is Phoebus and that her vessel was attacked by the Wraith on its way home.

The team is suspicious, so they ask Phoebus to let them speak with Dr. Weir. In a move resembling a Tok'ra giving over control to the host, presumably Elizabeth Weir speaks. She asks Sheppard to host Phoebus's husband in the other pod now recovered and waiting. She wants to say one last goodbye to her husband. For the sake of love, the group agrees. Knowing that the imprinting will only last a day, Sheppard accepts the mind transfer.

McKay theorizes that the technology's purpose was to act like a "black box" flight recorder on an airplane, giving information about the disaster. Even when a ship is destroyed and the crew member's body does not survive, his or her consciousness is preserved briefly in order to report back on what happened.

Sheppard awakes as Thalan. Phoebus informs him it is she, his wife, in Weir's body. After a long kiss, Phoebus/Weir asks for some privacy. Colonel Caldwell refuses. Phoebus manages to surreptitiously tell Thalan that there are two guards outside the doors. They make a break for it, grabbing the Wraith stunner pistols from the guards and shooting everyone in sight. McKay tries to shoot Thalan/Sheppard and misses, only to realize he is shooting at Sheppard's body.

Thalan/Sheppard runs off, but Phoebus/Weir enters and tells McKay that the man in Sheppard is actually an enemy. Then she shoots McKay and Beckett. Taking McKay's headset, she pretends to be Weir and orders Atlantis security to apprehend Colonel Sheppard. A race begins to find the two aliens and subdue them before they can kill each other, and thereby kill their hosts.

Colonel Caldwell directs the operation, over McKay's objections. Security searches for the aliens while the team works to find a way to reach them using the life signs detector and other Atlantis technology. Teyla and Ronon also join the search.

Thalan/Sheppard and Phoebus/Weir taunt each other over the communications system. The chatter is played to the command staff, who realizes that everyone was duped. These two are not husband and wife, but two warriors from opposite sides of an ancient war still trying to kill each other. They don't know their war is over – or they don't care.

Now the aliens are using Sheppard and Weir's knowledge about Atlantis's workings and layout. Thalan/Sheppard destroys the power control console with a submachine gun. Phoebus uses her knowledge to destroy the backup system, and Atlantis is paralyzed. Caldwell orders McKay and Beckett to get down to the power room and fix whatever they can for the primary systems. Luckily, the Z.P.M. is not damaged.

Thalan/Sheppard realizes that Ronon is lying in wait for him. He convinces Ronon that he is not the alien, but Caldwell is. Since Caldwell was recently a Goa'uld, everyone is suspicious of him. Gaining Ronon's help, Thalan/Sheppard gets night goggles and a stunner. She eludes patrols but manages to shoot Ronon in the stomach. Thalan/Sheppard finds Ronon and sends for a medical team. With only flashlights, Beckett must perform surgery on Ronon to save his life.

Eventually the two aliens have another shoot-out, but miss each other. Phoebus/Weir finds a control center locks down the city. She tells Caldwell to find Thalan/Sheppard and turn him over to her or she will mess with life support, maybe send a signal to the Wraith, or even kill Weir as a last resort. She figures out how to turn on the halon gas fire suppressant system and creates a shunt into the life support system, threatening to flood the living quarters with the deadly toxin and kill three-quarters of the city.

In the control room, McKay races to override the lockdown while Teyla stands guard over an unconscious Thalan/Sheppard, who she just stunned. Phoebus/Weir watches on the security monitor and waits for him to wake up, then orders Teyla to kill Thalan or she will release the gas. Colonel Caldwell tells Teyla to make her own decision knowing what's at stake. Teyla delays as much as she can, and in the nick of time McKay overrides Phoebus's controls.

Phoebus/Weir hurries to Thalan/Sheppard's location to kill him herself. But as she arrives Teyla passes the stunner pistol to him, and he catches Phoebus off guard with a blast.

Later, in the infirmary, Colonel Caldwell visits the recuperating Weir and Sheppard. Phoebus and Thalan's consciousnesses have gone. Caldwell teases her about calling him hopeless and declares the paperwork on this one will be a nightmare, especially because of the kiss. Embarrassed, Weir slinks down under the covers. But it's obvious: After Weir and Sheppard have experienced alien possession first-hand, Caldwell has finally been accepted as a good guy.