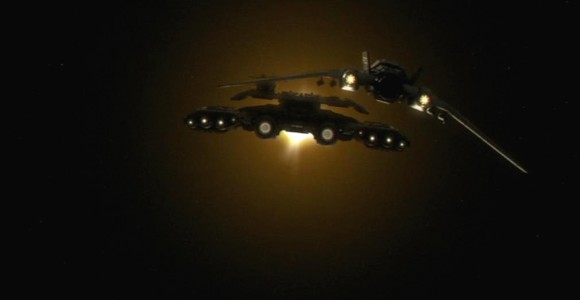 The Daedalus is infected by a Wraith computer virus, while members of the expedition hope to return to Earth.

Atlantis's senior staff and several other members of the expedition return to Earth through their Z.P.M.-powered Stargate. While there, new personnel is assigned to the distant base, and some unresolved matters are resolved. Simon reveals to Elizabeth Weir that he has met someone else. John Sheppard meets with Ford's family and explains the situation as best he can with the information blackout, and soon he is promoted to Lieutenant Colonel to lead Atlantis's military contingent – despite the objections of a very irritated Colonel Steven Caldwell, commander of the Daedalus.

Sixteen days into their return trip to Pegasus aboard the Daedalus, Sheppard and Weir find themselves keeping each other company in the morning hours. But their peace is interrupted by a report that Dr. Monroe has been killed. With burn marks on his fingertips, it's logical to believe he received a fatal jolt from his station. He had been running a routine diagnostic, but just before he was killed it's possible all power was rerouted in the section (killing cameras and doors) to give him the jolt that did it. Still the circumstances look suspicious.

After a public confrontation regarding procedure, Colonel Caldwell pulls Weir aside to remind her of the chain of command. But she knows exactly what he's frustrated about: he did not want to command the Daedalus, but to preside over the military contingent on Atlantis.

McKay analyzes the section Monroe had been working in and discovers that the doctor was busily trying to initialize certain security protocols that would shut down corrupted programs. Apparently there is a problem with the ship, and it could be that someone killed Monroe to cover it up. Caldwell orders an immediate drop from hyperspace.

When McKay and crewman Lindstrom attempt to trace the power spike, a coolant leak erupts in the room, forcing both men to evacuate. With Lindstrom trapped in a decompression chamber, the doors mysteriously open and he is sucked into space. McKay argues that no one could have determined where the men had been and what they were doing at that exact moment – indicating that none of the crew is a saboteur.

Asgard crew member Hermiod has done some searching through the systems himself, and has uncovered the problem: An artificial intelligence virus has infected the ship's systems. There is evidence of it in Navigation, Communications, and Propulsion – and the virus is spreading, rewriting itself as it grows. McKay soon makes an even more disturbing discover: the virus is Wraith.

He explains to the others that it was most likely transmitted in a compressed format and took some time to unfold and spread (since it has been some two months since the ship's last encounter with a Wraith ship). Plus the fact that the Daedalus has now returned to Wraith feeding grounds has likely activated it. It is programmed to take control of the ship and fly the Daedalus into Wraith territory, giving them access to its intergalactic hyperdrive technology ... and the coordinates to Earth.

The Daedalus begins broadcasting an unauthorized distress call. Without enough control to guide the ship to them, the virus is calling the Wraith. A complete systems shut down could take up to two hours, giving the Wraith plenty of time to learn the ship's position. Caldwell agrees to send Sheppard out in an F-302, where he physically destroys the communications array. The signal can no longer be broadcast.

His mission successful, Sheppard tries to return the craft to the hangar bay, but the ship has its own plans. The virus has uploaded itself into the F-302 and is flying him away from the ship. McKay extends the Asgard transporter beam to lock on to his radio signal and transports Sheppard back to the bridge, leaving the fighter out in space.

The crew now has time to perform a complete systems restart. But when the systems come back online, the virus copies itself from an unknown source back into the systems. What's worse, it sets a course for the nearest star's chromosphere, which will keep the ship intact for the Wraith but kill everyone on board.

McKay recalls a mission report of an incident where Stargate Command was overrun by an alien computer virus ("Entity"). It uploaded itself into a M.A.L.P. to stay alive during a system restore. Except, in this case, the virus has copied itself into potentially all of the Daedalus's F-302s. McKay proposes they manually disconnect all of the ships' memory boards to prevent the virus from using them as lifeboats.

After the virus tries to shut them out of the hangar bay, Hermiod beams Sheppard and McKay directly there. The virus opens the bay doors, but Hermiod manages to raise the forcefield. It will only be a matter of time before the shield is taken over by the virus and the bay loses atmosphere. Sheppard and McKay manage to remove all the memory drives and get into the last F-302 before the bay decompresses.

With minutes until lethal radiation exposure, the crew initiates another shut down. Once again, it does not work. Sheppard realizes they missed a computer – the one belonging to the F-302 left in space. The virus is still in control of that fighter, and it has been tracking them all along. He and McKay take their ship out to confront it, and it pursues. Dipping deeper into the chromosphere, Sheppard destroys the opposing craft. After one more shut down, the crew regains control of the ship.

The team makes their return to Atlantis, where Teyla reports that there has been no sign of the Wraith in the weeks they have been away. Apparently they still believe Atlantis was destroyed. Weir and the staff are eager to get back to work.