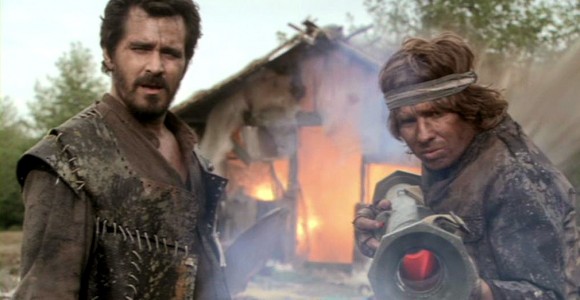 The Atlantis team finds a culture that lives in relative safety from the Wraith, because they hand over their criminals to the Wraith – and crash-land in the volatile penal colony.

Colonel Sheppard, Dr. McKay, Teyla and Ronon Dex take a Puddle Jumper to a new planet where none believe they have previously visited. When they find smoke from a fire John lands the ship.

The camp site is desolate with poorly-constructed shacks that barely stand. Without warning several arrows rain down on the team, one striking Ronon through the leg. Several inhabitants are eager to protect their land. When they are pinned down a ship appears in the sky, using its retro-thrusters to literally blow the prisoners away. Back inside the Jumper the ship gives Sheppard instructions to follow it back to the mainland.

There, Sheppard's unit is officially welcomed to Olesia by Marin, an official who dispatched the ship. They meet with the Magistrate and learn that the Stargate is located on an island penal colony, similar to Alcatraz. There, the Wraith are free to feed on the most violent of Olesia's inhabitants, leaving the society itself untouched. Sheppard obtains a private radio frequency and reports this to Dr. Weir, who is skeptical about this form of capital punishment. She orders Sheppard to return to Atlantis before negotiations for an Olesian mineral commence.

Over the island the Jumper is assaulted by anti-aircraft weaponry, technology McKay couldn't imagine they could have crafted. But it is too late to cloak the craft, and the ship falls from the sky a few dozen yards from the Stargate.

The unit is captured and tied up inside a shack at the camp. There they meet Torrell, the appointed leader of the prisoners, who orders McKay to begin repairing the Jumper so it can be used to "pay a visit to the mainland." Meanwhile the Olesian prisoners have familiarized themselves with the Jumper's cash of weaponry and equipment, including radios.

Back at the Jumper, McKay meets Eldon, a prisoner who put his skills to use in developing much of the weaponry by finding natural ores around the island. McKay removes a chip from one of the control boards and reports that it will be impossible to get the drive pods, the cockpit, or the Jumper's on-board D.H.D. working again. And with no D.H.D. on this Stargate, there is now no way off the island. But Eldon ensures Rodney that if he doesn't find a way, Torrell will make certain the Wraith find him first at the next culling.

McKay is sent back to the camp, where Torrell forces him to choose which one will die first for not cooperating in repairing the ship. While he gives him time to choose, Eldon tells of how the success of Olesia's disobedience policy has dropped the numbers of prisoners significantly. In response, they have lowered the bar to keep the feeding population adequately high.

Dr. Weir meets with the Olesian Magistrate, who orders a search of the island. Weir assures him that finding the team is in everyone's best interests.

With the guards on a break, Eldon returns with a knife, promising to set them free if it is assured that he will return with the team to their home. McKay re-emphasizes that there is nothing he can do to reactivate the D.H.D., but Sheppard sees through his lie, forcing him to reveal one small, almost hopeless possibility. Eldon cuts Dex's bounds, who then threatens to kill him, until Sheppard forces him into obedience. They are freed, not seeing the active radio in the corner of the shed.

Before reaching the Jumper Sheppard realizes the situation is too easy. A Wraith Dart soon emerges through the Stargate, sending ambushers out of hiding and into a fray for fear of their lives. With this break the team makes it back to the Jumper where Rodney commences repairs.

Meanwhile, the Olesian Magistrate apologizes for his tardiness, and sits down to a polite dinner with a Wraith commander. The Wraith insists the recent awakening has called upon the need for more food, and the current prison population of the island is now inadequate. The Magistrate promises to begin tightening his grip on their policies.

The Dart departs the planet. Marin comes to inform Weir of the real situation. The Magistrate does not intend to send rescue teams back to the island, and many people in the city are being apprehended for unspecified violations to increase the population on the island. The Magistrate and several soldiers appear to escort her away to trial, ensuring the matter about no second search is false, but Weir is not buying it, and her team arms themselves as they depart the building alone.

Sheppard, Dex, and Teyla leave the Jumper to counterattack Torrell's ambush team, but even as they are successful at taking down a number of them Torrell has control of the Jumper, right when McKay manages to siphon power to the D.H.D. While he is negotiating terms for escape a Wraith cruiser enters the area, barreling down on the wrecked Jumper. McKay returns to the console and finds that it is dead again, but he manages to redirect power to the drone weapons instead. The drone disables the cruiser and it begins to pull away, but another is at its heels.

Weir makes her presence known through Torrell's radio, and John, receiving it, instructs her to dial one of the planets considered for the new Alpha Site. Torrell and scores of the prisoners escape. Jumper Two then dials Atlantis, and the team, plus Eldon, runs back to the Stargate under Wraith cruiser fire. All members make it through. Weir is relieved, ready to follow.

The mainland is not experiencing relief, however. The Magistrate looks out his window, in undisguised horror, as a Wraith cruiser enters the airspace of the city.