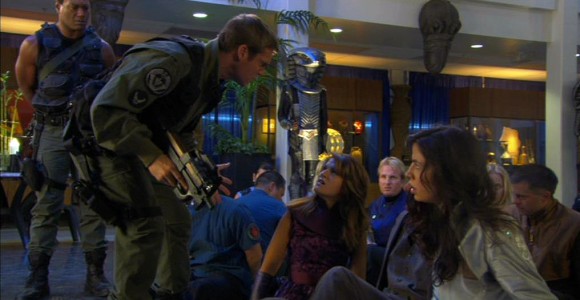 SG-1 realizes they have stepped through the gate into another planet's museum – but are mistaken for a band of zealous rebels who have taken hostages.

SG-1 visits an alien museum on another planet – but are mistaken for a band of zealous rebels who have taken hostages. Though they find a D.H.D. when they gate to the planet they are unable to get home, discovering that the dialing device is just a museum replica.

The usual approach is not an option, so the team decides to play along and "negotiate" their terms with the local authorities, led by a stern hostage negotiator named Quartus. Jayem Saran, a nighttime security guard inside the museum, hopes to be a hero and contacts the authorities outside with an offer to help take down SG-1.

Inside the museum they also soon meet Cicero, one of their hostages and a researcher at the museum. He has long been shunned for his belief that the Stargate is a portal allowing travel to other worlds, and he is overjoyed when he learns that the team came through the gate – and is sympathetic to their plight. While the team hopes to stall for time until help comes from Stargate Command, Cicero has plans of his own.