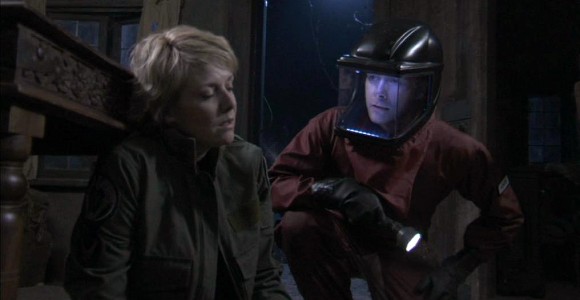 SG-1 investigates a problem off-world and soon finds that they have become victims themselves: they cannot stay awake. Meanwhile, Vala Mal Doran undergoes an evaluation on Earth, hoping to join SG-1.

Colonel Cameron Mitchell, Colonel Samantha Carter and Vala Mal Doran are waiting as Teal'c gates back from off-world. In eight days, six more worlds have gone Ori. Two Jaffa planets resisted, but were overwhelmed in hours. According to reports, a young woman with extraordinary powers led the invasion.

As they head from the Gate Room discussing the possibility that the Ancient super-weapon in Antarctica is deterring the Ori from attacking Earth, Dr. Daniel Jackson runs to them. He announces that he's found the gate address for one of the planets where Arthur searched for the Sangraal.

Briefing General Hank Landry, Vala and the others, Jackson explains how connecting Welsh and Ancient led him to search Merlin's library for Sir Gawain information. There he discovered a depiction of his sword with a gate address engraved on it. Carter reports that attempts to dial out to the Ori galaxy from the Supergate have failed. Teal'c adds that there is a mothership watching for more Ori vessels. Landry orders SG-1 to head out, but he tells Vala she must remain at the S.G.C..

Later, Jackson compares Vala to Teal'c when he asks Landry to take a chance and allow Vala to accompany SG-1. Landry agrees, with the proviso that Jackson keep Vala in line and that she undergo a psych evaluation.

SG-1 finds Vagonbrei deserted, minus many skeletons. Most of the villagers seem to have died in their beds. S.G.C. personnel members Reimer, Ackerman and Grimsby join as medical support.

In the town hall records, Jackson finds mention of a cave overlooking the village that was home to Morgan Le Fay – in Earth legend, a sorceress, half sister of Arthur, and adversary of Merlin. Teal'c suggests that this Morgan may have been ascended, like Merlin. Recognizing the danger his weapon posed to any ascended being, she may have stolen it.

SG-1 and Ackerman search for the cave. Teal'c points out there are no birds, in fact no animals anywhere.

Landry visits Vala, diligently studying. He encourages her to be herself. When she does meet with Dr. Hutchison, she tells him she's a candidate for "acculturation difficulties," but that she has "adopted an abstract attitude," allowing for "cathartic actualization."

Ackerman naps while SG-1 searches the cave. Finding nothing, they return to the village.

Dr. Hutchison attempts an inkblot test, but abandons the effort in irritation because of Vala's obviously studied and pre-planned responses.

Ackerman can't be found when the teams decide to call it a day. Mitchell locates him in a chair, seemingly asleep. They cannot wake him. Dr. Reimer reveals that their white cell count is elevated, as are their serotonin levels. They have all been infected with something; they must stay awake or they may never wake up again.

Carter realizes that they have a strong urge to sleep. Reimer reports that Ackerman is producing excess melatonin, which is keeping him asleep. Jackson finds mention of a sleeping sickness that hit the town – the result of a curse by Morgan le Fay, angered because they revealed her whereabouts to Arthur. He suggests rechecking the cave.

As they search the cave again, Carter has Mitchell take soil samples in case this is where Ackerman picked up the infection. An energy spike reveals the entryway to a larger cave / tunnel complex. Mitchell and Teal'c head in while Carter takes the samples back.

Vala is preparing for her next round with Hutchison when Richard Woolsey pays her a visit. He suggests he and his organization can ensure her success if she becomes a spy for the I.O.A.

Deep in the cave, Mitchell and Teal'c pause. They hear an animal. Surmising it's immune, they set out to trap it.

Grimsby has fallen asleep and Ackerman has died. Carter and Reimer perform an autopsy, which reveals an enlarged version of the parasite.

Vala has a disastrous encounter with a lie detector. Woolsey is waiting in her quarters for her answer. In her last encounter with Hutchison, she admits she has recently been risking her life for something other than herself – due to someone finally believing in her.

As Carter tells Jackson how the parasite provokes a lethal aneurysm, Reimer, loaded up on stimulants, has a heart attack. They try unsuccessfully to revive him. Jackson and Carter fight to keep each other awake even as Teal'c captures the creature, a large lizard. Mitchell, exhausted tells Teal'c to get the animal back to Carter for the cure.

Carter and Jackson are about to sleep when Landry's hazmat team arrives. Teal'c reaches the surface as the new group finds the cave.

Back at the S.G.C., Jackson admits to finding a reference in the Vagonbrei archive: Atlantis. Their quest should next take them there.

Vala demands to leave, shouting insults at the Stargate control room officers, until she learns she been approved. She is stunned. As her first official act, she tells them about Woolsey. When the I.O.A. official confirms his role in her testing, Vala confronts him with claims of sexual advances. Woolsey, dismayed, follows Landry out of the room. She asks for her SG-1 patch, but Mitchell tells her she's probationary S.G.C., not SG-1. To celebrate, she wants to take them to lunch, suggesting Jackson can front her money until she gets her share of the loot.