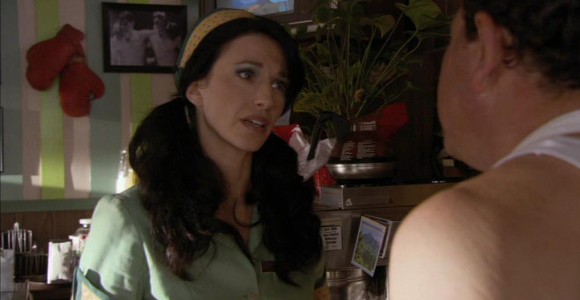 Striken with amnesia and on the run, Vala takes a job as a waitress as she tries to piece together who she is and what happened to her.

Dr. Daniel Jackson takes Vala Mal Doran to dinner at a nice, off-base restaurant to reward her for adjusting to a new life and for not falling back on her old ways. She, of course, sees it as a date ("dinner, a movie and/or karaoke followed by ... well ..."). When Vala heads to the restroom, she is kidnapped. She cues the waiter that something is wrong. He alerts Jackson, who reaches the entrance as the car bearing Vala pulls away.

Vala awakens later, strapped to a gurney. Her transponder has been removed and she is wired to a Goa'uld memory recall machine. Charlotte Mayfield, a woman in the Trust who was allied with Baal. She is now host to a Goa'uld who was once both partner and rival to Qetesh – the Goa'uld who once possessed Vala. She is searching for a code to an Ancient tablet which reveals the location of a treasure map. Vala has suppressed Qetesh's full memories, but her subconscious contains residual memories.

Jackson briefs General Hank Landry. The local police are conducting interviews as well as a search. Certain that the Trust is behind Vala's disappearance, Landry has called in N.I.D. Agent Barrett.

Vala resists the memory recall device with such determination that it elicits only a few flashbacks and intense emotion. She tells her tormentors that she will kill them in the most painful way possible.

Lt. Colonel Cameron Mitchell bounds into Jackson's lab with the news that Barrett has come up with a list of suspected Trust safe houses. Five teams are dispatched to various locations for a simultaneous raid. SG-1 joins one of the raids, but Vala is not there.

But SG-15 and local law enforcement do storm the place where Vala is held. During the attack, a zat blast hits the memory recall machine, sending an added charge into the device – and Vala's mind. Survival instinct takes over, and Vala escapes before the explosive charges set by the Trust operatives detonate, killing those rescuers who survived the initial attack.

Jackson interrogates Weaver, the lone Trust survivor, as Teal'c watches. Mitchell and Lt. Colonel Samantha Carter observe from another room. When the man refuses to talk, Jackson leaves him to Teal'c. The rest of SG-1 joins Jackson in the hall. Mitchell suggests eating, as this could take awhile. The captured man claims he is impervious to Jaffa interrogation techniques. But Teal'c only whispers in his ear and the man is ready to talk.

Wandering on foot, hungry and tired, Vala goes into Sol's Diner. Unable to pay, she tries to leave, but is confronted by Sal, the owner and cook. She confesses that she has amnesia ... and no money. Sal offers to help, and offers Vala a job as a waitress at the diner.

Based on information obtained from the captured Trust operative, Jackson determines that Charlotte Mayfield is the Goa'uld Athena, a mid-tier player who rose higher by parlaying alliances. Partnered now with Baal, she has learned about Vala and has been waiting for the chance to grab her. Jackson tells Mitchell that Athena does not know Qetesh lied – that the tablet and treasures are a hoax.

Investigators are checking DNA to see if Vala was among the dead at the fire-bombed safe house. Just as he refused to believe that Vala was killed when she interfered with the Supergate, so now Daniel refuses to believe she died in the raid. Athena does not believe Vala is dead either.

At the diner, Vala draws attention to herself when she handily incapacitates two would-be robbers. This results in her being taken to the local police station and questioned about the incident by Detective Ryan, a regular at the diner. He initiates a missing person search. The notice ends up at the S.G.C. – and at Charlotte Mayfield's office. Both now know where the amnesiac Vala is.

A fake SG-1 comes for Vala minutes before the real team arrives. Mitchell commandeers a motorcycle to give chase. Vala struggles with her captors, and their car flips over. Emerging uninjured as Mitchell approaches, Vala captures Mitchell after he exchanges fire with a Trust operative. When a concerned motorist stops to help, Vala seizes his vehicle. She takes Mitchell because he seems to know who she is.

Mitchell wakes up in his underwear, handcuffed to the bed in a motel room. Vala tells him of her memory loss. He tries to explain who she is, that she is an alien who has come through the Stargate under Cheyenne Mountain. Unconvinced, she takes more of his money, returning with a bag of junk food.

Carter and the Trust agents receive calls at the same time telling them Mitchell's transponder signal has been located.

Vala is gone by the time SG-1 arrives. Mitchell, still handcuffed to the bed, is watching TV, eating the rest of the junk food. Carter can't resist commenting about Mitchell always losing his pants.

Wandering the streets once again, Vala spots a cop car on patrol and ducks into an abandoned warehouse. While Mitchell dresses, SG-1 is alerted to her location. Searching the building, the team is attacked by Trust agents. Jackson locates Vala first, and jogs her memory by telling her that she's been running so long its second nature, but she's made the decision to stop running.

Once Dr. Carolyn Lam has cleared her for active duty, Vala reunites with SG-1 and Landry in Jackson's lab – her memory fully restored. There she is welcomed back and awarded full operational status as an SG-1 team member.