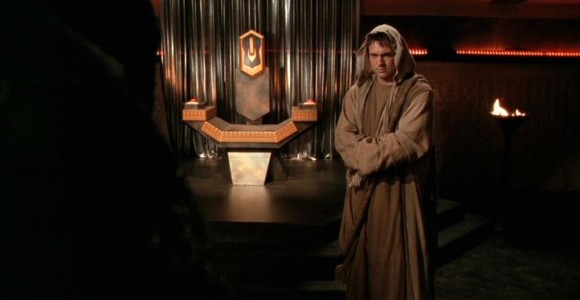 SG-1 is called to defend the people of Abydos from the Goa'uld once again when they learn that Anubis, in search of a powerful device, is about to attack.

Not knowing whether or not Season Six would be their last, The Powers That Be of Stargate deigned to call the season finale "Full Circle." Even though fans have now been ensured 22 more episodes -- and a possible movie -- the title is still appropriate.

"Full Circle" is a good example of the saying, "The more things change, the more they stay the same." Once more we find a grave threat posed by a power-hungry Goa'uld. Once more we find Abydos under attack. Once more, mistakes are made and loved ones are lost, but there is still hope for the future.

Naturally, there are also differences. The show hasn't hit a reset button or attempted to keep things at the status quo for the last six years. Along with the introduction of new enemies and allies, the characters have changed over time in ways too momentous to properly address in a short review. The team is closer, they have gained hard-won knowledge, and they have been through a slew of difficult experiences together. The Goa'uld, in all of their theatrical finery, aren't as frightening anymore -- as evidenced by Jack's provocation of Herak -- but what they can now do is all the more horrifying.

The character in this episode that's changed the most physically is Daniel Jackson, who transformed into an "enlightened" glowing entity at the end of the fifth season. Since then, we've only seen him a few times as he attempts to get his Boy Scout merit badge in Moral Support. In "Full Circle" he returns to Abydos, trying to protect it as he was unable to in "Children of the Gods." But, as an ascended being, he isn't able to directly interfere. Instead he turns to SG-1, compelling them to go to Abydos and find the Eye of Ra before Anubis can discover its whereabouts.

However, no sooner do Jack and the others recover the would-be weapon than Daniel brokers a deal with Anubis. If the Eye is handed over, he says, Abydos will be safe and SG-1 will be free to use a tablet they found in the pyramid to locate the lost city of the Ancients.

Unfortunately, it's very rare to have a Goa'uld who met a promise he didn't like to break. With the Eye in his procession, Anubis quickly dispatches a fleet of motherships sent to stop him, and then destroys Abydos.

Many explanations may be given for Daniel's actions. It is in character for him to have a narrow focus, to miss the big picture and focus on the small details instead. Add that to overconfidence in his abilities, or an assuredness that Anubis wouldn't betray a fellow pseudo-Ancient by going back on his pledge. Or perhaps Daniel was aware of the big picture, came to realize that more was at stake in this situation than one planet, and decided to take a risk. In either case, the people of Abydos paid with their lives -- or would have, had Oma not interceded.

In a way, the destruction of Abydos, the original planet from the "Stargate" movie, also brought a strange sense of closure to the series, and certainly a measure of finality.

This episode had a lot to accomplish in a relatively short time. Not only did it have to potentially complete the series, but it had to lead into the movie and drop in a few hints about the possible spin-off, as well. Because of this, the pace was slightly hurried. Depending on one's stylistic preferences, this could be a good thing or a bad thing. The plot developed quickly, from the very minute that SG-1 find out about the Eye of Ra and its potential dangers.

But because of the large percentage of action in the episode, the character interaction suffered somewhat. For example, Daniel's greeting to Sam was nearly nonexistent, and even the most dramatic events -- such as Skaara's death and the realization that the Abydonians had ascended -- were a little stilted.

The final scene of the episode -- what could very well have been the final scene of the series -- was something else that was familiar; longtime viewers might be reminded of the closing scene in "Emancipation," for example. And while it was comforting in its familiarity, it also left a little something to be desired. A bit more closure -- perhaps a final scene on Earth, hinting at the future, however vaguely -- would have been a nice addition. (A good example of such would be the closing scene in "Revelations.")

All in all, I found "Full Circle" to be an enjoyable episode, asking questions and opening possibilities, driving home the idea that the journey is never really over. Although some characters had more prominent roles than others, there was hopefully something for everyone to enjoy: Jack's wit and sarcasm, Skaara's wedding invitation, lively banter between characters, Jonas' use of the exclamation "sweet," Teal'c firing a gigantic gun, and so on.

Would "Full Circle's" ambiguity have gone over as well if it was the last episode of the series? We'll never know. But the way things are now, it certainly makes us wonder what the future holds.