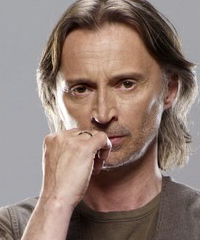 A scientist placed in charge of the top-secret Icarus Project, Dr. Nicholas Rush would find himself the leading scientific mind on board the Ancient deep-space vessel Destiny -- traveling in a distant galaxy with no means of returning home. Rush is brilliant and cunning, someone who keep his cards close to his chest and always thinks three steps ahead of everyone else -- and who usually acts in his own self-interest.

Rush's wife, Gloria, died a slow and painful death from cancer, during which time he withdrew from her and buried himself in his work on the Ninth Chevron Project. But he couldn't unlock it, and after two years of working finally acknowledged that he had hit a wall with his power requirement equations and began to seek outside help.

Rush installed a rudimentary version of the Ancient language into the online computer game Prometheus. Young Eli Wallace interpreted the information in the game and spent a month working on Rush's mathematical equation before cracking the code. In his debt, Rush personally invited him to join the Icarus Project.

When the first test of the new power settings proved fruitless on-site, Rush blamed the failure on Wallace's equations, but it was Wallace who suggested the problem be solved by setting the Stargate's point of origin to Earth.

When Icarus Base fell under attack from space Rush disobeyed Colonel Everett Young's explicit orders to dial home to test Eli's theory. The Stargate connected to the ninth chevron address and the furious Young had no choice but to send the Icarus team to the Destiny.

Rush's ultimate goals are unclear. He found himself smiling as the 80-plus refugees spilled out of the Destiny Stargate into a scene of utter panic. He is fully capable of disregarding the orders of Colonel Young when they do not serve him, and appears to hold advances in science -- and his own desire for power -- above the safety of others.

Rush is no stranger to hard work. He earned a scholarship to Oxford while working two jobs. His father worked in the Glasgow shipyards. A past relationship may hold the key to his current instability.

Air, Part 1 - Dr. Nicholas Rush enlists the aid of Eli Wallace to help unlock the mysteries of the Stargate's ninth chevron.
Air, Part 2 - With carbon dioxide levels rising aboard the Destiny, Rush looks to the team manifest to determine who's life is the least valuable -- and most worthy of sacrifice.
Air, Part 3 Believing the Destiny has linked to a specific planet for good reason, Rush joins an expedition to a desert planet in search of a substance to correct the ship's life support failure.
Darkness - Strained by a lack of caffeine, nicotine, and no sleep, Rush has a nervous breakdown after the ship's power goes out and collapses.
Light - Rush asks Colonel Young to remove his name from the shuttle lottery, indicating that he is content to remain with the ship and die when it dives into a star.
Earth - Believing Colonel Telford's plan to gate the crew back to Earth could kill them all, Rush tricks him into thinking the attempt was a near-catastrophic failure.
Justice - After framing Young for the apparent murder of Sgt. Spencer, Rush is beaten by the Colonel and left stranded on a barren planet.
Space - Picked up and mentally interrogated by an alien race, Rush escapes his captors (with help from Colonel Young) and returns to Destiny -- agreeing to maintain his lie about him behind accidentally left behind.
Divided - Rush and Camille Wray lead the civilians in an attempt to take control of Destiny, but ultimately fails. When he reveals the aliens implanted a tracking device next to his heart, Rush is subject to a dangerous, mid-battle surgery.
Human - Rush sits in the ship's control interface chair, where in a lucid dream he is forced to relive his wife's slow death from cancer.
Sabotage - Nicholas plays host to Amanda Perry, an old friend and a brilliant scientist from Earth, who reveals she has a romantic interest in him.
Pain - Infected with an alien tick, Rush hallucinates being caught by the aliens again, then imagines an alien incursion onto Destiny.
Subversion - Rush uses the communication stones to pose as Colonel Telford and infilitrate the Lucian Alliance, but is found out and used by Kiva for his Stargate expertise.
Aftermath - Rush discovers Destiny's bridge, but the control it gives him proves too much for him to handle alone. He also sees hallucinations of Gloria and Dr. Franklin, and does not know if they are manifestations of the ship's A.I. or his own mental fractures.
The Greater Good - Trapped with Colonel Young on a derelict alien ship, Rush finally confesses the truth that he has learned about Destiny's profound mission.
Malice - After Amanda Perry is murdered Rush sets out across a desert planet on a one-man mission to exact vengeance on her murderer.
Twin Destinies - After an alternate Rush appears, Nicholas joins a team in recovering resources from a copy of Destiny -- where his doppelganger meets a disturbing fate.