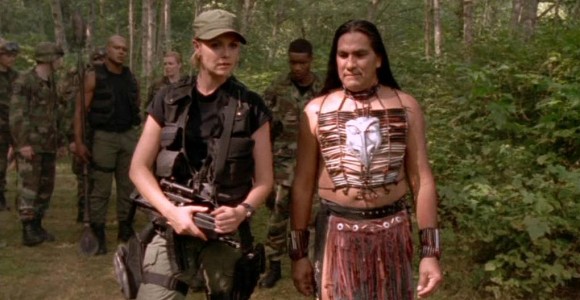 Looking for trinium, a valuable metal element that is 100 times lighter and stronger than steel, SG-1 visits a world populated by the Salish, an offshoot of a Native American Indian tribe. The group, led by a kind and perhaps naive man named Tonane, has somehow found a way to refine the trinium on their world for use in armor, weaponry, decoration and a number of other purposes.

With Jack O'Neill out of commission due to a trinium arrow shot through the Stargate as a warning, it is Captain Carter's first command mission.

The metal, Tonane tells them, comes from the Spirits. They send down through the river only as much as the Salish need. They are happy to share with Earth, but will not allow them to come to their world and mine the mountain with explosives and other destructive things.

SG-1's mission is two-fold, though. Their primary mission is to locate SG-11, the team first sent through the gate to locate samples of the trinium ore. They are missing, and Tonane does not know where they are. He suggests plainly that SG-1 ask the Spirits, and leads them off into the woods.

Tonane introduces them to two particular spirits – one in the form of a wolf (called T'akaya) and another in the form of a raven (called Xe'ls – pronounced "Zales"). The team swallows their pride and speaks to the animals, asking for help in finding SG-11. The "spirits" seem to agree, and lead them back toward a cave. SG-11 emerges, confused about where they are and what it going on.

The two SG teams return to Earth, and report to General Hammond that they have failed in negotiating mining rights with the Salish. Hammond finds this unacceptable, and speaks of the possibility of waiting until the Salish migrate for the winter and taking the trinium anyway.

At this, the "Spirits" react harshly. They are actually advanced aliens with metamorphic powers – they can assume the shapes of other people and of animals. They also have the power to make people disappear into a dimensional stasis with a simple wave of the hand. The aliens have impersonated SG-11, and are now inside the S.G.C.

The Spirits begin to attack the facility, causing base personnel to vanish. But things are complicated, because Tonane is also on Earth. While Jackson keeps him distracted from the action, O'Neill and Teal'c must subdue the aliens.

They manage to shoot Xe'ls with a zat gun, rendering him unconscious. And when the other Spirits threaten to eliminate all of the S.G.C., O'Neill bargains with them. The trinium will not be mined, the Salish will be left alone. The aliens heal Xe'ls, bring back Hammond and the other mission personnel, and a tenuous peace is established.

But because of the events that have transpired, the Salish way of life will be irrevocably changed. The Spirits' true identities are revealed, and Tonane meets the real Xe'ls and T'akaya.