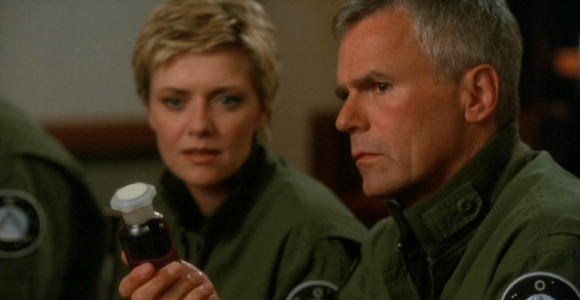 An alien world offers Earth a medicine with the power to cure any illness – but the hidden price may be too high to pay.

Watching "Cure" was somewhat similar to eating a box of Cracker Jacks. But instead of reaching in at the bottom and finding the typical toy surprise, the viewer was gifted with a variety of surprises, both small and grand in scope.

"Cure" was the second episode written by the series' new staff writer / producer, Damian Kindler. The episode leisurely unfolds, and in the process, answers several questions left over from many previous episodes. Additionally, several new questions are generated that will hopefully be addressed later in the season. The themes of redemption and sacrifice are explored again, and there is a nice bit of name-dropping: Ra, Apophis, Shaq'ran, Egeria and Dr. Jackson.

This episode also served to highlight the resiliency of Jack O'Neill's character and the depth of his empathy. And it assisted in the rehabilitation of the Tok'ra's status as allies of Earth that began in last week's episode, "Allegiance."

The Pangarans discovered Goa'uld temple ruins over 100 years ago, and as they excavated the site, became aware that they might not be alone in the universe. They realized the Stargate was an interplanetary transportation device, but were unable to decipher the number of symbols and their sequence required to enter a viable address on the D.H.D. This situation again establishes how exceptional it was that Earth discovered how to use their Stargate.

O'Neill and Carter, who each have now been hosts to both Tok'ra and Goa'uld symbiotes ("Into the Fire" and "Abyss" for Jack; "In the Line of Duty" and "Nightwalkers" for Sam), continued negotiations with the Pangaran officials, Dollen (Malcolm Stewart) and Commander Tagar (Daryl Shuttleworth -- who previously portrayed Commander Rigar in "New Ground"). The SG-1 aliens, Teal'c and Jonas, visit the temple ruins with Zenna Valk (Allison Hossack), supervisor of the temple research project.

The Pangarans want to trade their miracle drug, tretonin -- which can supposedly cure all diseases, for workable Stargate addresses. The Pangarans declined the addresses to safe worlds that SG-1 offered; and adamantly requested addresses to Goa'uld home worlds. This sets off Jack's internal trouble alarm again. Then, Zenna Valk mysteriously informs Jonas that there is something they need to know about the tretonin.

O'Neill and Carter return to the S.G.C. to have the tretonin tested, and Jack orders Teal'c and Jonas to keep digging to see what they can find. What they do dig up is a hatchery for Goa'uld symbiotes. Confronted by SG-1, the Pangarans reveal that they use the symbiotes in the manufacture of tretonin. When humans use the drug, it acts like a symbiote, suppressing the immune system. The drawback is that the user has to keep on taking the drug, and in larger quantities as time progresses.

The Pangarans also disclose that they have a Goa'uld queen symbiote. Sixty years prior, a sealed canopic jar had been uncovered in the temple ruins. Inside the jar, in stasis, was the Goa'uld. The Pangarans began medical experiments ten years later, and have induced the queen to breed for the past 30 years (an asexual process -- the queen can fertilize her own eggs). Essentially, the symbiote has been held prisoner and medically tortured during that time.

Further plot developments involve contacting the Tok'ra for assistance. Malek (Peter Stebbings), who was introduced in "Allegiance," responds to SG-1's call for help. Accompanying him is another Tok'ra, Kelmaa (Gwynyth Walsh -- B'Etor from Star Trek: The Next Generation).

On viewing the Goa'uld queen for the fist time, Malek and Kelmaa react very dispassionately at the conditions. The symbiote is contained in a small tank, barely large enough to accommodate the symbiote with its large detachable egg sac. And, the symbiote has massive cellular degeneration and is dying.

It is Jack, who has been a prisoner before ("Abyss," "A Matter of Time"), and has endured torture, who is empathetic. When Jack asks Malek if the use of the Goa'uld bothers him, Malek replies that the Goa'uld have done no worse to humans for centuries.

Despite Jack's recent experiences with the Tok'ra, his right-or-wrong moral compass recognizes the injustice to the Goa'uld. His empathy extends to a creature that all rights would vindicate him in ignoring the circumstances. But Jack's character is firmly defined as the role of a protector ("Entity"), and the symbiote is in need of protection.

Only when it is revealed that the symbiote is not a Goa'uld, but the Tok'ra queen Egeria ("Crossroads"), that the Tok'ra react with a great amount of indignation over the circumstances. Kelmaa sacrifices her life in an attempt to rescue her queen -- and mother. Unfortunately, the implantation of Egeria into a host can't prevent her death. But before Egeria dies, she reveals the key information to create the antidote to the tretonin.

The death of Egeria leaves open the mystery of the lifespan of the symbiote. We have never learned why it is that the symbiotes have such a long life span. When they do not have the use of a sarcophagus to extend their lives, the symbiotes change hosts as their hosts eventually succumb to the ravages of time ("Seth" and "The Tok'ra, Part 2").

Was Egeria's death hastened by its circumstances, or only the inevitable conclusion to a long life?

My only quibble with this episode was having Jonas be the key player in translating the revealing text on the temple walls. Teal'c by all rights would have made more sense.

Christopher Judge seems to be having fun with the Teal'c character this season. He appears more relaxed, more willing to smile. Plus, I noted not only in this episode, but also in "Shadow Play" and "Allegiance" that Teal'c is being more outspoken and speaking for SG-1, without seeking (or appearing to need to seek) O'Neill's approval.

"Cure" is an intriguing episode. It may also have suggested the solution to the Jaffa already incubating a symbiote. Will the Tok'ra, or the S.G.C., be able to create a drug similar to the tretonin, that will enable the Jaffa to live without their symbiotes?