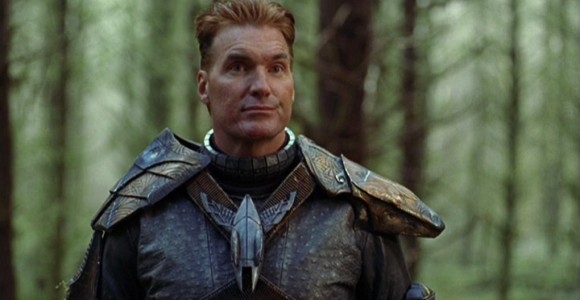 SG-1 is taken captive by an alien bounty hunter with uncertain loyalties.

SG-1 wanders through a lush forest on an alien world, searching for a downed U.A.V. probe sent from Earth. They find it, and more than they bargained for. An impenetrable energy field surrounds them in a carefully planned trap. SG-1 is caught.

Their captor emerges from behind a tree. He is Aris Boch, a bounty hunter working for the Goa'uld. He appears humanoid, though his race is not from Earth. His technology is advanced. His temperament is ... well, obnoxious.

Aris is good at what he does, and he seems to enjoy it. He is polite to his new captives,and even jokes with them. But when it comes to his mission and his bounty, Aris Boch is deadly serious.

Aris takes SG-1 to his ship – a cloaked Goa'uld transport vessel. With a password spoken, the ship reappears and the team is taken aboard. Carter and Teal'c are put into the on-board holding cell, while Jack O'Neill and Daniel Jackson remain with Boch.

He is quite familiar with SG-1, and wants the opportunity to see them "at work." More specifically, he wants them to help him capture a Goa'uld hiding out on the planet. Keltar, he has been told, is plotting against the powerful rebel Goa'uld Sokar, and Sokar has offered quite a price for him. Aris has approached the caves where Keltar is hiding out, but defense systems kept him from getting close.

Aris is even willing to loan O'Neill a zat gun to accomplish their mission. He tosses the weapon to Jack, who casually turns and fires it at the bounty hunter. Boch is stunned, and falls unconscious – or so Jack and Daniel believe. After they leave, Aris gets up and follows them back to the ship.

There, Jack and Daniel are frantically trying to stop an automated self-destruct countdown.With Teal'c and Carter locked aboard the ship, they have no way of disarming the device without Aris Boch's help. With only seconds left, Aris arrives and stops the countdown. He just wanted to see the team sweat a little, hoping that they would be more willing to help him out.

Aris's armor protects him from zat blasts. Teal'c joins Jackson and O'Neill in tracking down Keltar, while Aris keeps Major Carter with him.

Carter learns a little more about Aris's race while she is with him. He tells her that his species' physiology naturally reject the Goa'uld symbiote. In response to this, the Goa'uld wiped out most of his race and enslaved the others. He and the rest of his people are addicted to a chemical – roshnah – in order to keep them subservient. Aris's goal is to one day raise enough money through bounty hunting to buy the freedom of his son.

The team easily disarms the Goa'uld devices protecting the caves, and force Keltar out into the open. But again, the bounty hunter is not to be trusted. Keltar tells SG-1 that he is, in fact, a Tok'ra (Goa'uld resistance operative) named Korra. SG-1 cannot turn over one of their allies to the bounty hunter.

When the team does not return, Boch sets another trap for them – with Carter as the bait. He captures O'Neill and Carter, and the others soon after.

Aris believes that all Goa'uld are the same – but SG-1 begins to convince him that the Tok'ra are different. They are fighting the Goa'uld. They are honorable. Aris agrees to let Korra go free, but he has to have someone to give to Sokar. Teal'c volunteers. Of SG-1, he is the most valuable to the Goa'uld.

Left with no choice, the team says goodbye to Teal'c and vows to find him. O'Neill, Carter, Jackson and Korra head for the Stargate, while the transport ship ascends into the sky to meet Sokar's awaiting ship.

Aris's change of heart goes even further when he sees Teal'c's willingness to sacrifice himself for Korra. He activates the self-destruct mechanism, and he and Teal'c flee in escape pods.

Sokar will find out that Aris double-crossed him soon enough, but this will allow SG-1 and Korra to go free. Aris gives Carter a sample of the roshnah, in hopes that Earth might one day find a way to free his people from the Goa'uld.