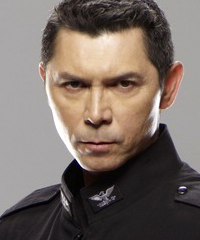 Colonel assigned to Icarus Base following a year-long, deep cover mission inside the Lucian Alliance. Telford was selected to lead a team to the ninth chevron address in the event Dr. Nicholas Rush made a successful lock.

An experienced F-302 pilot, Telford climbed into his cockpit when Icarus Base came under surprise attack by the Lucian Alliance. In the process the planet's unstable radioactive core went critical, and Telford, unable to land, was forced to retreat to the George Hammond before it exploded. Now on Earth, Telford's responsibility to the mission was his paramount concern as he struggled to maintain channels of communication with the Destiny.

Telford's bull-headed nature won him few friends at Icarus Base. He intended to press charges against Ronald Greer after the sergeant assaulted him, but Colonel Young, who later insisted Telford "had it coming," released Greer from confinement to help defend the base during a surprise attack. Greer is now aboard Destiny and out of reach.

Eight months into his assignment as a spy inside the Alliance, Telford learned of their plans to attack another Earth facility on P2S-569 -- but did not report it, in order to maintain his cover. Thirty-seven people lost their lives, but Telford was exonerated of any wrongdoing.

Several months after the attack on Icarus, Rush and Young discovered that Telford had become a double agent for the Alliance, and had been sharing Earth's secrets since he left them. He was the subject of brainwashing at the hands of the Alliance -- which could explain why two people who have traded bodies with him have experienced bleed-through of Telford's memories.

Everett Young broke Telford of the brainwashing that had made him a traitor by nearly suffocating him to death then reviving him -- similar to the Jaffa Rite of M'al Sharran. Thanks to a Lucian Alliance invasion of the ship (which he was instrumental in defeating), Telford arrived on board Destiny. Soon after the invasion was put down, however, Telford was lost when the ship encountered one of the seed ships sent ahead of Destiny by the Ancients. As Telford worked on the ship (populated by a team of aliens) to restore a power transfer to Destiny, Dr. Rush un-docked the two ships to break the power drain -- leaving Telford behind.

The aliens -- called 'Ursini' -- were not hostile, though, and with Telford's help they got the seed ship up and running, eventually coming to Destiny's rescue when it came under attack from a swarm of drone ships against which the Ursini are also fighting. The encounter allowed Telford to return to Destiny. Soon thereafter he was able to gate home to Earth, while a duplicate version of Telford -- created by a time dilation event -- was (unbeknownst to anyone else) accidentally killed in a struggle with Dr. Rush.

Air, Part 1 - Colonel Telford leads a squadron of F-302s against death gliders and a troop transport to give Icarus Base personnel time to escape.
Air, Part 3 - Telford uses the communication stones to take the body of Colonel Young aboard Destiny, abusing it to the extent that T.J. tranquilizes him. Back on Earth, Young takes Telford's body to report to General O'Neill in Washington.
Darkness - Telford trades bodies with Colonel Young again, confronting Lts. Scott and Johansen and ordering them to report home that Young needs to be replaced.
Earth - Telford brings two scientists to the ship with a dangerous plan to dial the gate back to Earth from inside a star.
Life - Colonel Young confronts Telford when he learns the man has struck up a personal relationship with his wife, Emily, and ends up assaulting him.
Subversion - Rush discovers that Telford is working for the Alliance, and trades bodies with him in order to prove it. Stuck on Destiny at Young's mercy, David is subject to interrogation and eventually confesses.
Incursion, Part 1 - Young suffocates and revives Telford (in Rush's body) to break him of Lucian Alliance brainwashing. When Rush gates to Destiny in Telford's body, their connection is broken and Telford returns to his own body -- convincing the Alliance he is still on their side.
Incursion, Part 2 - While executing his plan to restore Destiny's computer control to Rush, Telford is discovered by Kiva and shot.
Intervention - Telford survives his injuries, thanks to the arrival of medical personnel from Earth (via communication stone).
Aftermath - After the incursion is put down, Telford maintains the ruse that he is still on the Lucian Alliance's side.
Awakening - Telford urges Colonel Young to let him in on the mission to an Ancient seed ship, and is left behind -- with a group of aliens -- when the two ships are forcibly separated.
Cloverdale - In Matthew Scott's dream world Telford is the friendly sheriff of his home town, Cloverdale.
Resurgence - With Destiny under attack, Telford and the Ursini fly to the rescue, and he explains their plan to attack the station controlling the automated drones.
Twin Destinies - Telford attempts to lead Destiny's people back to Earth, but is the only one who makes it. Elsewhere another version of him is killed by Dr. Rush in struggle on board a duplicate Destiny.
Seizure - Convinced that Earth's allies the Langarans have made a secret pact with the Lucian Alliance, Telford participates in a mission to take control of their Stargate and use it to dial Destiny.
Gauntlet - With Destiny's crew about to enter long-term stasis, Telford reassures Colonel Young that he and Earth are not giving up on them.