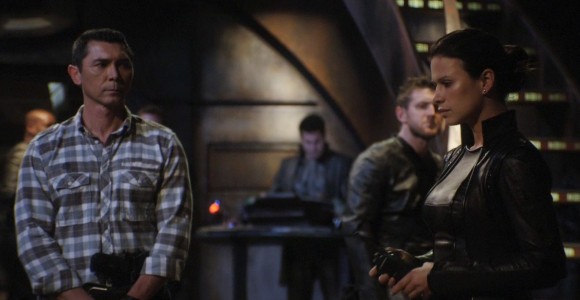 While Colonel Young and Kiva grapple over control of the ship, a pulsar threatens everyone on board with deadly radiation.

Young tries unsuccessfully to exchange Greer for Lt. Tamara Johansen, a captive of Kiva, by claiming that he is a medic. As the supplies are handed over, Destiny's lights go out – as they have been doing since shortly after the Alliance strike team boarded the ship. When the lights come on, Greer is aiming his weapon at Kiva. Dannic is pointing a gun at Greer. Angry about what she perceives to be an ambush, Kiva marches T.J. and the supplies back to the Gate Room where she immediately shoots and kills Corporal Rivers. 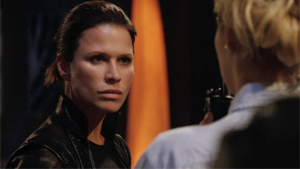 Furious, Young takes out his frustration on his science team. Nicholas Rush adds to the tension by suggesting that Rivers wasn't that important. (No one notices that he was important to Lisa Park – "Life.")

T.J. establishes a make-shift infirmary in a storage room and operates on Varro, an Alliance soldier who was injured upon arrival through the Stargate. Kiva radios Wray and agrees to the prisoner transfer Wray suggested ("Incursion, Part 1"), provided food and water are included.

By the time Young returns to the Control Interface Room, Rush, Park, Adam Brody and Dale Volker have discerned the cause of the blackouts. When the gate was dialed Destiny dropped out of F.T.L. flight to receive the incoming wormhole. Unfortunately, the ship has stopped near a binary pulsar, and its radiation has compromised the F.T.L. drive. Every 46 minutes and 37.4 seconds, the shields must absorb a lethal burst of ionized radiation. Rush warns that after several more gamma ray bursts, people will start dying.

The lights go out again just before the transfer. Wray explains the problem to Kiva, hoping to forestall any more killing. Kiva brings two civilians and one military captive. Puzzled because she expected to see Eli Wallace and Chloe Armstrong (who she does not know are on their own in another part of the ship), Wray insists on a fourth member of Destiny's crew. Kiva consents, but has Rivers' dead body dragged in. 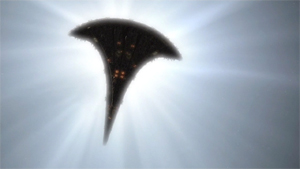 Eli is carrying the injured Chloe, who was caught in the crossfire and shot through the leg ("Incursion, Part 1"), through an unexplored portion of Destiny. Tired, he puts her down before opening the next door. They are both nearly swept into space through a hull breach. Recovering somewhat, Chloe talks about true friendship. Eli realizes that she knows he is in love with her, but she sees him only as a friend. Uncomfortable, he looks away and spots an active console. He sends a message to their people, coded in Ancient. Someone responds on the other end, telling them to stay put.

Meanwhile, the science team has a potential fix for Destiny's pulsar dilemma. Only the side of the ship that is facing the pulsar and its bursts of radiation needs shielding. Shifting the shield power will buy time to repair the F.T.L. drive. Unfortunately, the shield strength must be manually shifted using a special control mechanism ... on Destiny's external hull. The nearest egress is a breach ("Space") that sits within Alliance-controlled territory. But when the situation is explained to Kiva, she refuses to grant them passage unless she is given control of Destiny.

Ostensibly checking on the corridor near the Control Interface Room ("Incursion, Part 1"), David Telford retrieves a hidden radio. Kiva still believes he is working for the Lucian Alliance – but their brainwashing was recently broken, and now he walks among them as a mole for Colonel Young. Calling Young, Telford outlines a plan: Young must surrender control of the ship. While Destiny's personnel are rounded up and the shield is shifted, Rush and Brody hide in an auxiliary control room. Telford will surreptitiously access a computer terminal and pass control back to them. Alliance prisoners would be taken to T.J.'s storage room infirmary. Air can then be vented from the Gate Room, killing the Alliance invaders. 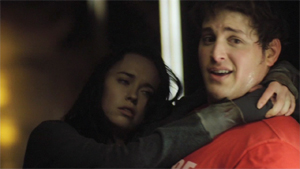 Reluctantly, Young agrees. Control transfer begins. The power dips as Destiny takes another radiation hit. With 46 minutes before a lethal blast penetrates the hull, Scott and Greer suit up and begin their spacewalk. The rest of Destiny's crew is taken to the mess hall.

Telford damages a power conduit. When an Alliance scientist named Calvos moves to investigate, Telford starts transferring ship's control back to Rush's auxiliary console. Realizing that someone is watching him, Telford pulls his gun, aiming at Kiva – who is also pointing a weapon at him. They both fire and fall, both gravely injured. The transfer stops, giving Rush only partial control of Destiny systems.

Struggling with time-worn parts, Greer and Scott successfully shift Destiny's shielding. With little time left before the next radiation blast, they return to their egress point. But the shield is in place, keeping them locked outside the ship. Dannic ignores requests to let them re-enter Destiny.

Unaware of the cause, but knowing something must be done, Rush directs Scott and Greer to an airlock in the forward section – where he knows Eli is. Eli receives his message and, understanding the timing will be close, leaves Chloe behind and races toward the airlock. 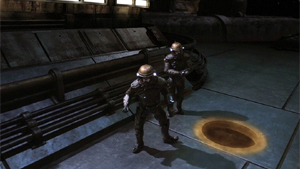 Dannic has the civilians taken elsewhere. All military personnel are to be brought to the mess – even the injured ones in T.J.'s infirmary. As T.J. points out that she can't save Kiva if she is removed, an Airman grabs for an Alliance weapon. Amid a spray of bullets, Varro kills him. The pregnant T.J. lies unconscious, bleeding from the belly.

As Eli, Scott, and Greer run for the airlock, Chloe loses consciousness. Dannic orders all the military personnel in the mess to kneel. Colonel Young refuses. His eyes fill with grief as he looks upward. No help is coming.

The lights flicker and go out.