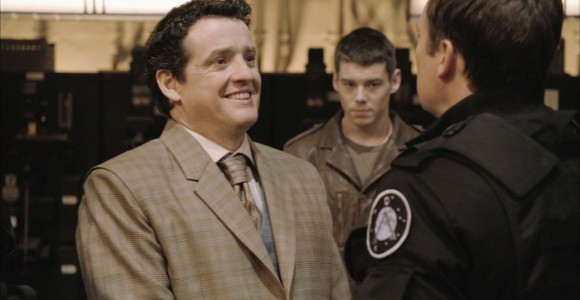 Homeworld Command tries to convince an ally occupying a naquadria-rich planet to let them try to dial Destiny, but suspects that they have already been infiltrated by the Lucian Alliance.

Colonel David Telford and I.O.A. representative Richard Woolsey meet at the Pentagon with Ambassador Ovirda and other delegates from the planet Langara – a long-time ally of Earth ("Meridian"). Earth wants to use Langara's naquadria core to power another attempt to dial the ninth chevron. The goal is to establish a supply line and send relief personnel to the crew on board Destiny. The Langarans worry that their planet might explode as did the Icarus planet ("Air, Part 1").

Having revised the formulae Eli Wallace and Dr. Nicholas Rush used, however, a confident Dr. Rodney McKay tells the assembled delegation that he believes Langara would be perfectly safe. 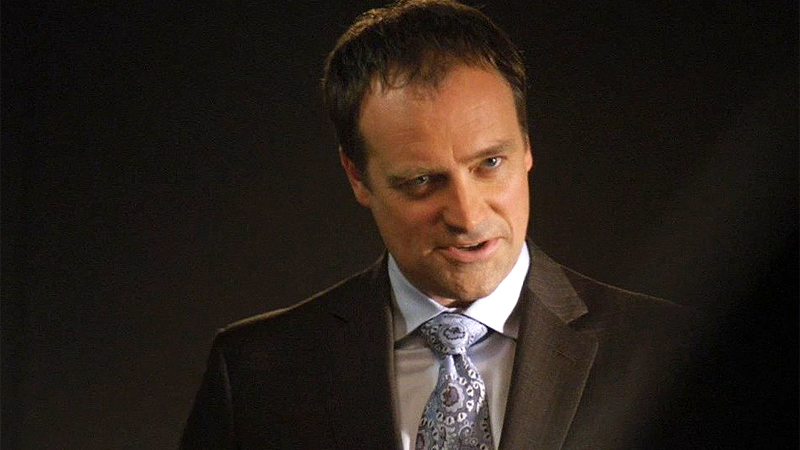 The Langarans refuse. They want to verify McKay's work first. Telford argues that the Lucian Alliance also wants to use Langara's Stargate to reach Destiny again. When they come they will not take no for an answer – nor will they use McKay's safer formulae for powering the wormhole with the planet's volatile naquadria core. Still, Ambassador Ovirda refuses.

Woolsey certainly understands the Langaran position. But Colonel Telford is convinced that the Langarans already have an agreement in place with the dangerous Lucian Alliance. As proof, he offers still un-deciphered communiqués between the Langarans and the Alliance that Earth has captured with spy satellites. The head of Homeworld Command, Major General Jack O'Neill, has authorized Telford to undertake a military mission to Langara to prove that the ninth chevron can be safely dialed.

Destiny's commander, Colonel Everett Young, joins the strategy session on Earth in via the communication stones. Young wants Dr. McKay to swap bodies with Rush in order to come on board the ship and brief Eli before the ship's crew commits to the plan. While on Earth, Rush can study McKay's laptop.

But Rush is unavailable. Using the neural interface chair, his consciousness has been uploaded into the immersive simulation program that Young experienced ("Trial and Error"). Here he can visit with Amanda Perry and feel as if he is actually in physical contact with her, though her consciousness is now stored in the ship's computer ("Hope"). They have spent considerable time together, sharing a variety of experiences.

Annoyed with Rush, Young asks Adam Brody to switch bodies with McKay instead, so that Eli can verify McKay's research. When Eli agrees that the plan is scientifically sound, Young and McKay return to Earth. 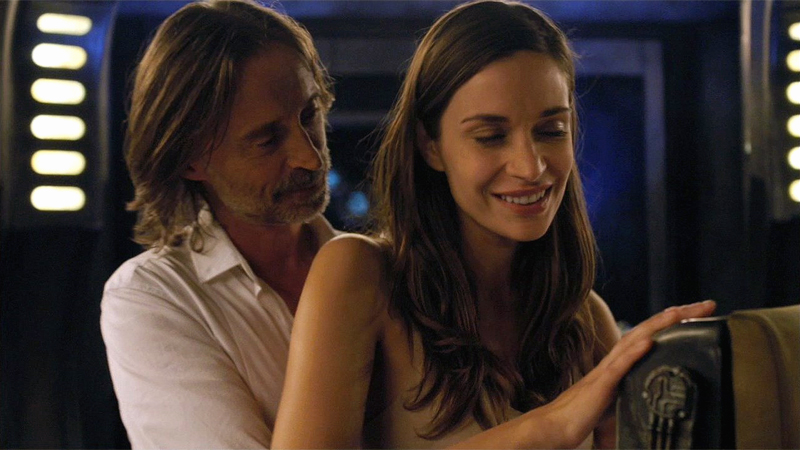 The first objective of Telford's mission is to prove McKay's approach. The second is to ascertain whether the Langarans have a pact with the Lucian Alliance. Woolsey and McKay, however, refuse to participate if Telford intends to take the Langaran Gate Room by force. Young reassures them that is not the plan.

Woolsey and an Airman first arrive in the Langaran Gate room with a peace offering for their allies: an Ancient communication stone. When the unsuspecting Langaran Captain inspects the stone, he instantly swaps bodies with Lt. Matthew Scott on board Destiny. Lt. Scott authorizes Woolsey to visit Administrator Halperin, the Langaran official in charge of their Stargate facility. He, in turn, examines the other communication stone – promptly having his mind swapped bodies with Colonel Young. Telford, McKay, and SG-4 and SG-5 arrive through the Stargate, and in the guise of the Administrator, Young allows McKay to prepare the Langaran Stargate to dial the ninth chevron.

Meanwhile, Woolsey slips back to the Administrator's office to search for the Lucian Alliance communiqués.

The Langaran Captain's second in command is suspicious. He believes that this test could ignite Langara's naquadria core. Scott assures him that was a bargaining position, but the man remains unconvinced.

On Destiny, Rush wants to leave the simulation. He sits in the Ancient chair and Perry activates it – but it does not return him to reality. Perry is puzzled. Rush realizes the simulation is isolated, so there is no way the program can be deactivated from inside. Perry disappears. 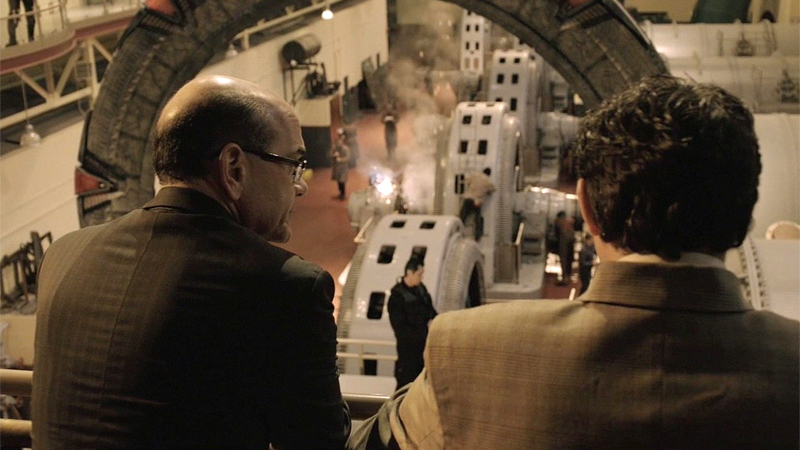 Eli tries to summon Ginn ("Hope"), but she doesn't appear. Hesitantly, he tells Brody and Chloe Armstrong that he and Ginn were trying to figure out a way to be intimate. It involved uploading and then downloading Eli's consciousness. But Ginn felt it was too dangerous. Apparently, Perry and Rush didn't share that view.

Perry rejoins a flustered Rush inside the simulation. She blames Ginn's disapproval for Rush's inability to return to reality. He again sits in the Ancient chair, and this time it seems to work. Since he has been gone over 12 hours, a hungry Rush heads for the Mess.

Using an emergency shutdown of the F.T.L. engines as a diversion, Ginn now appears to Eli. She tells him that Perry has been blocking Ginn's effort to reveal that Rush is still trapped in the simulation. She is about to tell Eli how to alter the program and free Rush ... when she disappears.

Inside the simulation, Perry attributes the F.T.L. shutdown to a potential overload that she has now fixed. But Rush grows suspicious. He strips Destiny of shields to prove that he is still trapped within the simulation. Amanda admits to a mistake in programming the parameters: she assumed he loved her as she loves him. That would have allowed him to come and go as he wished. Telling him not to blame himself, she disappears.

On Langara, Woolsey returns to the Gate Room. He reports what he has found from his snooping: the Langarans haven't entered into a secret deal with the enemy, but in fact they have refused every overture made by the Lucian Alliance. As McKay dials the first chevron to Destiny, Ambassador Ovirda arrives. He is not fooled by what is going on inside his facility, and orders his troops to shoot the intruders if the eighth chevron encodes. Woolsey wants to surrender and return to Earth. But Telford refuses: they must see the mission through and determine that the ninth chevron can be dialed safely. 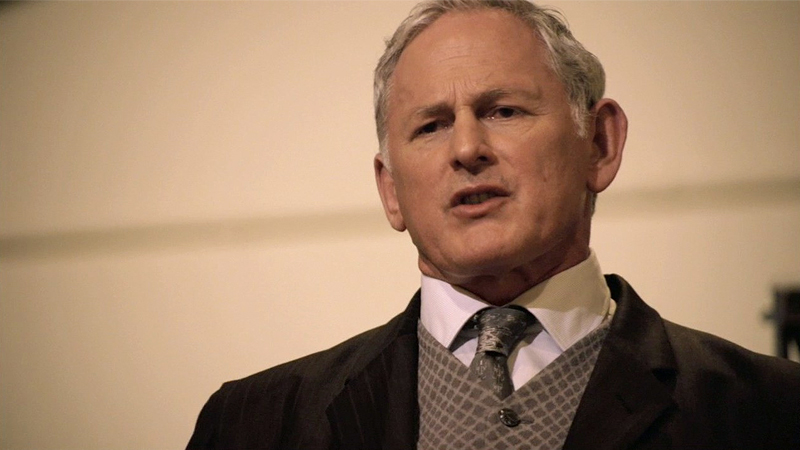 As the fifth chevron locks, McKay tells Young that the power levels are as predicted. His formulae work. The seventh chevron locks. But Young orders them to abort the dialing sequence and surrender to the Langarans.

Soon after, Lt. Scott and Colonel Young return to Destiny in defeat. The Langarans have released Woolsey, McKay, Telford, and his team in exchange for removing the Stargate from the power facility and defending Langara from the Lucian Alliance in the future.

After two days in a coma in the Infirmary, Nicholas Rush awakens. Eli bitterly explains that he was able to rescue Rush only by quarantining the memory bank where Ginn and Perry are stored. Once again, both men have lost the women they love.