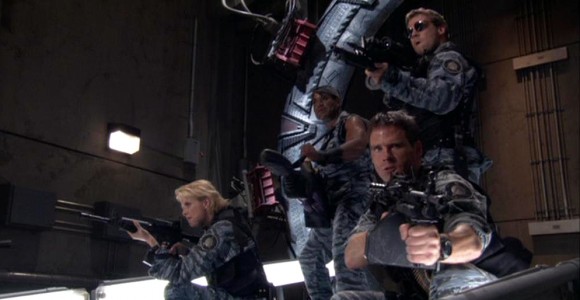 We were halfway through an exhausting Season Nine and heading toward hiatus. In order to give the various hard-working departments a much-needed break, we had to come up with a story that would take place on our standing sets, requiring no major builds, no major set dressing, and no major costume demands. After some discussion, we dug up an old idea Brad had pitched the year before, a story in which various alternate-world versions of SG-1 come to the base. We spun the idea over lunch, after which I headed off and wrote the outline. While Paul worked on "Collateral Damage," I wrote "Ripple Effect."

It was a lot of fun to write and has become one of my favorite scripts for many reasons, the chiefest of which being: I like alternate reality stories in which one is free to imagine the "paths not taken." But, in the case of "Ripple Effect," I made of point of touching not only "the paths not taken," but "the paths taken" and "the paths to be taken." I referenced many past episodes ("Red Sky," "A Matter of Time," "Out of Mind," "Heroes" I and II, "The Fourth Horseman" I and II, to name a few) and incidents (the quantum mirror, Entropic cascade failure, the Asgard time dilation device), and even dropped a few subtle hints at future episodes ("Ethon," "Camelot," "Counterstrike").

Unfortunately, because the episode was long, some was lost in the editing process. So, for those fans who enjoyed the episode as much as I did (and here's hoping there are a few), here is an extra-long version of my behind-the-scenes installment, in which I give you the lowdown on scenes and sequences you missed ...