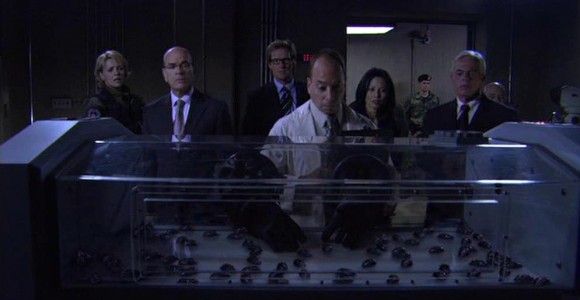 A tour of an off-world research base for a group of foreign diplomats turns dangerous when an insidious insect species gets loose.

Discussing the fact that Earth has beaten back the Ori plague by delivering the cure to other worlds, Mitchell, Carter, Jackson, and Teal'c walk through the corridor into the gate room where they arm and start up the Stargate ramp. But General Landry scrubs their mission at the last moment, telling them that the Pentagon has assigned SG-1 the task of accompanying representatives from member nations of the International Oversight Advisory (I.O.A.) – Shen Xiaoyi, Mr. LaPierre, Mr. Chapman, and Richard Woolsey – to the Gamma Site. Though the support of the I.O.A. has become vital to the Stargate program, it's a babysitting job.

As they begin their tour, Carter explains that this planet was chosen for the base in part because of its radioactive ionosphere, which protects them from being detected from space. Pearson, the base commander, introduces them to Dr. Myers, head entomologist, studying an asexual, fast reproducing, voracious insect called R75. The bugs have devastated crops on several worlds visited by Ori Priors, and may or may not be the next salvo in the Ori arsenal. The bugs avoid predators and find prey via echolocation.

Myers has discovered that the bugs live longer when they are deprived of food. Later, he is surprised when they ignore a leaf he offers – so he gives them a piece of meatloaf, which they devour. They have become carnivorous.

Also eating meatloaf are the I.O.A. delegates and SG-1. Jackson talks to Shen Xiaoyi, who notes that since China signed the Gate Alliance Treaty three years ago ("Disclosure"), they have received none of the technological benefits the U.S. military has had. Daniel is quick to acknowledge that the complaint is legitimate, and that with the U.S. military in charge she shouldn't expect things to change. But Shen suggests that the U.S. may soon have no choice.

Back in the bug lab, Myers and another scientist return to find that the bugs have reproduced enough to fill their containment unit. As the two watch, the bugs burst forth and swarm toward them. Myers quickly seals the door and activates the emergency biohazard disposal protocol. But one bug has escaped and bites Myers, who quickly kills it.

As the delegates prepare to leave, Myers collapses. Pearson locks down the base until they understand the source of Myers's illness. He is readied for transport back to Earth via the Stargate, while the increasingly agitated delegates are forced wait. But the soldiers drop his containment tube when bugs erupt from his mouth. The creatures swarm across the floor and the gate room is evacuated.

Carter, Teal'c, and Jackson decide the bugs are indeed Ori related, especially since the adapt to a new food type once they have devoured an initial source. Pearson pronounces the gate room lost, and orders the I.O.A. group taken to the surface. Woolsey insists SG-1s escort them.

On the surface, they head for an unmanned research station 10 miles away. Suddenly, Teal'c hears what Carter identifies as the bugs' echo-locating. They are traveling underground, and the team is their prey. As the bugs consume one soldier, everyone runs. The other soldier guides them to a cave. Carter indicates that gunfire directed toward the ground will create a concussive sound that should drive the bugs back.

On Earth, Chief Harriman tells Landry that they can only detect motion sensor telemetry when attempting to communicate with the Gamma Site, which Dr. Lee says emanates from R75. He tells Landry that the bugs were being studied for use against the Lucian Alliance's kassa crops. Fearing all human life has been lost, Landry orders Lee to create a neuro-toxin to be delivered by the Odyssey, per the extreme measures protocol CR-91. The bugs must be contained no matter the cost.

In the cave, Jackson and Shen Xiaoyi again discuss the Chinese government's position on the Stargate program. She confesses that her report will ultimately be meaningless, hinting that her leaders have already made up their minds.

Mitchell unsuccessfully attempts to communicate with the Gamma base. Walker, guarding the cave entrance, feels a bug crawling under his skin. When Carter says they cannot outrun the bugs on foot, Teal'c suggests F-302s. But Jackson soon announces that Walker is missing. Daniel, Cameron, and Teal'c find Walker some distance away, dead and full of bugs. Jackson returns to the cave, while Mitchell and Teal'c go for the 302s. But before they make it back to the base, they witness its destruction from the self-destruct mechanism.

Carter informs the delegates that the Odyssey may indeed be coming – but CR-91, which presumes the planet is devoid of human life, will be in effect. Jackson suggests they'll be located because of their new transmitter implants, but Carter reminds him of the ionosphere interference. Given their location within the cave and the huge number of bugs around them, their life signs will be undetectable.

Jackson suggests relocating to the research station, five miles away, as it has a transmitter which Carter says she can modify to reach the Odyssey as soon as they enter orbit. They near the facility when LaPierre, obstreperous throughout, refuses to continue. Mitchell hands him a pistol so he can cover them. The bugs he will hear, says Mitchell, but not the silent, decapitating "tree ferrets." Carter smiles to herself as LaPierre reconsiders and hurries to join the others.

When they reach the station, Teal'c and Mitchell hold off the pursuing bugs with gunfire. As Carter boosts the transmitters power to penetrate the ionosphere, vibrations from the communications array attract the bugs. Mitchell, Jackson, and Teal'c rig an early warning perimeter of explosives and defend the station with the last of their ammo. As the team fires the last of their ammo at the ground to keep the carnivorous bugs at bay, Odyssey beams them all up as the bugs swarm over the station.

Back on Earth, Mr. Woolsey briefs Landry and SG-1 ... and reveals them that despite the formal reprimand they will probably receive over the incident, the I.O.A. is quite impressed with them. Landry informs the team that two more planets have been hit with the Prior bugs, and a way to fight them is being researched.

When Landry departs, Jackson asks if everyone is up for movie night. Mitchell he has the perfect movie picked out: Starship Troopers.