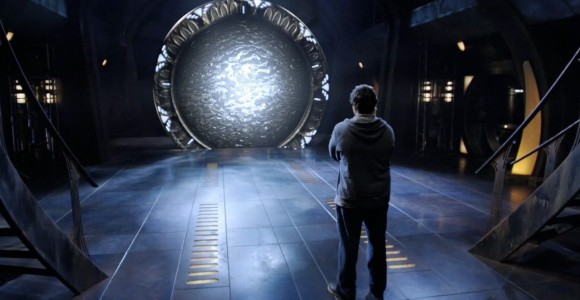 Destiny is attacked by drone ships while attempting to recharge its power reserves, forcing most of the crew to gate to a nearby planet while Eli tries a risky alternative.

With power reserves down to 40 percent, Destiny heads toward a star for refueling. The ship clears a gas giant that it has skirted for nearly four hours. But the crew finds that enemy drones and a command ship are there waiting for them. Lt. Matthew Scott attempts to navigate around them, but the hostile ships block Destiny's route. The drones attack, but Destiny jumps into the safety of F.T.L. flight.

Concerned that the drones and command ships may be aware of Destiny's need to refuel and are staking out nearby stars, Dr. Nicholas Rush this time targets a star off Destiny's projected path. Destiny drops out of F.T.L. flight four hours away so she can revert back if the enemy vessels await them. Again, they find drones blocking their route. 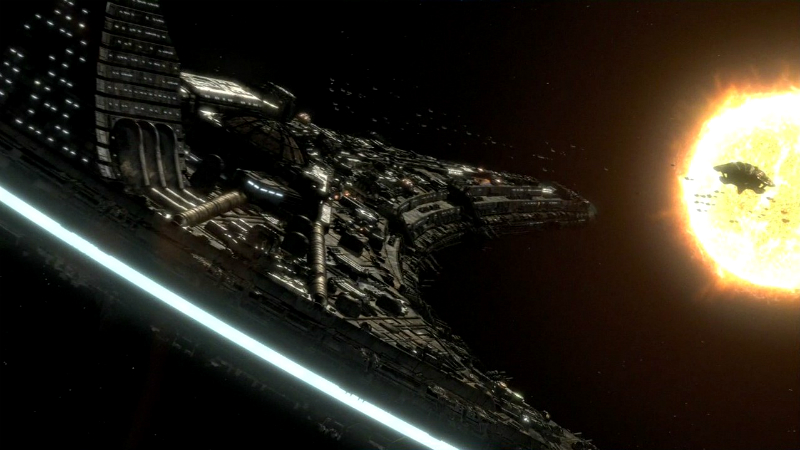 With the need to refuel growing even more urgent, Eli Wallace proposes they avoid the usual red dwarfs in favor of a blue super-giant. Because of the heat generated by a Class-O star the crew will use the Stargate to evacuate the crew to a nearby planet during the refueling process. Using the ship's space suits to protect them, Rush and Eli will manually pilot Destiny through the star.

Since the plants in the domed hydroponics room will burn, volunteers harvest what crops they can for storage. Concerned that irreplaceable hybrids and medicinals also will be lost, Lisa Park volunteers to don the third space suit and keep harvesting the precious materials until the last moment.

Destiny drops from F.T.L. flight and the crew dials the Stargate. The kino reveals a deserted city on the planet they've dialed – one apparently built by descendants of the Novans. The Stargate is housed inside a warehouse, which may provide the crew with some shelter. The evacuation commences and, with seven hours remaining before they can return safely to a super-heated Destiny, Colonel Everett Young creates several teams to scavenge the abandoned settlement for supplies. Camille Wray, Lt. Vanessa James, and Varro remain at the warehouse with the bulk of the crew with orders to return to Destiny in seven hours, no matter what. 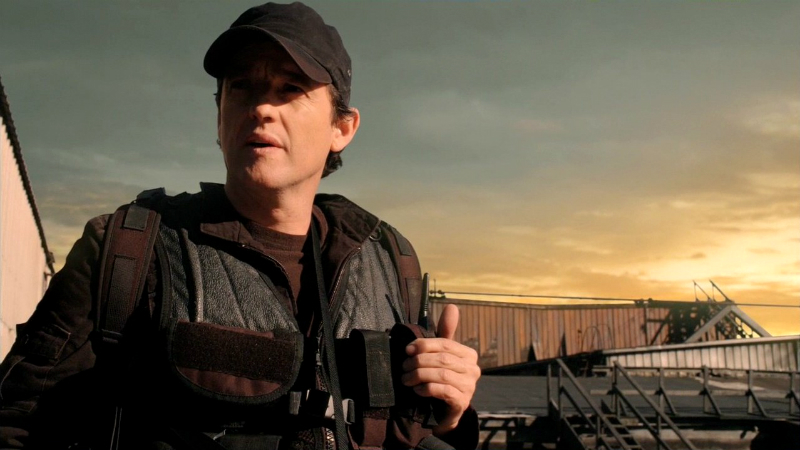 Lt. Scott and MSgt. Ronald Greer both lead one search party while Lt. Tamara Johansen and Corp. Barnes take another. Dale Volker immediately notes the absence of any vehicles. Young, scouting on his own, climbs to a vantage point and sees that the city was clearly attacked and its inhabitants wiped out.

Back at the warehouse, Dr. Morrison finds a sheet of newspaper with the headline "ATAK." His hysteria rises as he realizes the inhabitants of this world were likely attacked by the drones. Wray and James try to calm him. Varro prepares a rocket launcher, realizing that they may not be safe from the enemy here.

After collecting canned food from a diner, Scott and Greer's teams continue along a main road. Suddenly, they hear the sound of an approaching drone. Taking shelter in nearby storefronts, they watch as the automated drone cruises up and down the street, searching for them. Another drone joins the hunt. While they are pinned down, T.J.'s group (who found and raided a pharmacy) rendezvous with Young. He sends them back to the warehouse.

Morrison's agitation increases as the sound of a drone now fills the warehouse. He grabs the remote dialing device. Seeing other Stargates available, he starts to dial to a different world. James punches him and grabs the device, halting the dialing procedure. When she alerts Scott by radio, the second drone leaves. Having detected the transmission the remaining drone fires on Scott's position. From across the street, Greer draws its fire. He and Scott openly shoot it as the teams escape. Young appears, and his added fire helps to destroy the drone. The Colonel leads his people into an underground passage as they start back for the warehouse. It will be difficult to survive long enough for it to be safe to return to Destiny. 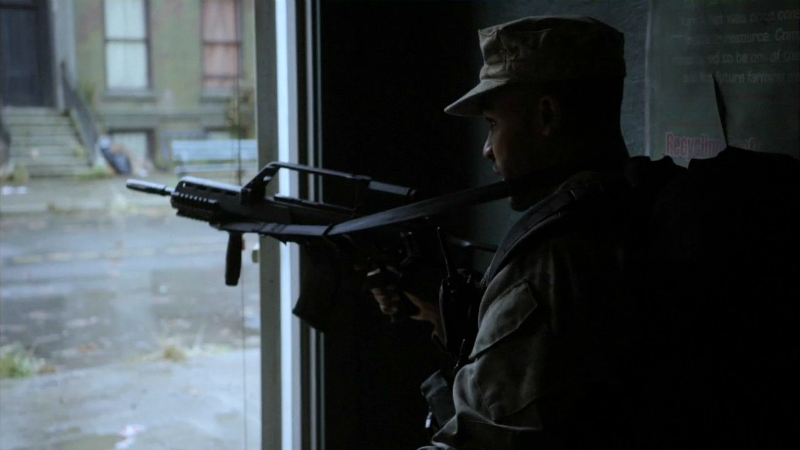 Drawn by the radio signal, the second drone reaches the warehouse. Varro blows it up with his rocket launcher just as T.J. and her people arrive.

Meanwhile, back on Destiny, Eli helps Dr. Park pick plants until Rush summons him to the Control Interface Room. As Rush and Eli sort out who will pilot Destiny an alarm sounds in the dome room. Park gathers her gear and the harvested plants, heading toward the door. But before she reaches it, the door automatically closes and locks to secure the ship. Neither Rush nor Eli can override the lock-down; Lisa is trapped.

Without any other options, Rush tells her to put on her helmet and get in the collection pool. Submerged in the water, he hopes that she should survive the heat.

As Destiny flies into the star, Eli takes manual control. The ship's internal temperature rises to 150 degrees. The shields hold so Rush activates the collectors. Fluctuating variables unnerve Eli as he constantly recalculates their flight path, but Rush steadies him. Soon the drives are recharged to full power, and Eli steers Destiny out of the star. The internal temperature is 310 degrees. 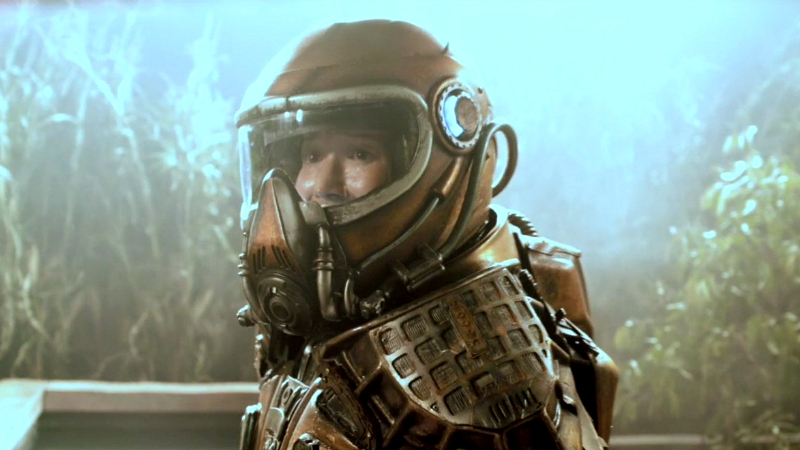 The hydroponics dome bursts. Park is pulled out of the pool by the loss of pressure, but her suit's mag boots hold her to the ship. Eli races down to the dome room to find that Park has made it to the door. Rush overrides the lockout remotely and Eli pulls her to safety. But she reveals that the intensity of the star has left her blinded.

On the planet, Young and the others finally reach the warehouse. He wants to leave immediately – but they are still 10 minutes shy of the minimum seven hours Rush mandated. But the sound reverberating outside indicates that a drone command ship has found them. Young orders an early return to Destiny where it's still hot. They return to find the ship safe.

With Class-O stars as rare as they are, the crew knows that they won't be able to duplicate this scheme the next time Destiny needs to refuel. But for the moment, they have a full tank of gas. Destiny escapes to F.T.L. flight, safe ... for now.