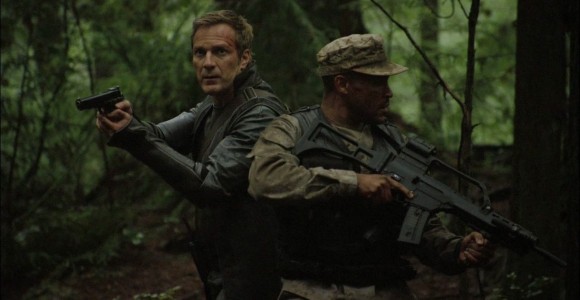 The crew organize a desperate rescue mission after a predatory creature attacks an offworld team and takes two people captive.

Planet-side, near a research campsite, Lt. Matthew Scott and MSgt. Ronald Greer track a deer-like creature in the forest. When Greer fails to take the shot, Scott takes aim with his weapon. The creatures spook. Something attacks the two men. Greer has a clear shot, but again fails to take it. The campsite – staffed by Lt. Tamara Johansen, Dr. Lisa Park, and Corporal Reynolds, among others – is also attacked.

Many are injured, including Lt. Scott and Dr. Park. T.J. and Reynolds are missing. Back on board Destiny Colonel Everett Young reviews kino footage of the incident that has been recovered from the planet. As he and a search party prepare to return to the alien world, he asks Greer why he froze up during the incident. Greer doesn't know. 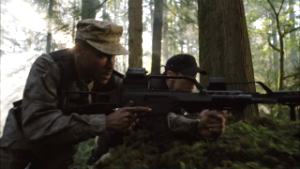 Scott, left in command of Destiny, visits the Mess. Varro volunteers the hunting skills that many of the Lucian Alliance crew members possess. Like Varro, they want to continue to integrate into the ship's crew and prove themselves useful. Since the trail on the planet has been lost, their services are going to be needed.

While the others hunt on the planet, Dr. Nicholas Rush, Eli Wallace, and Adam Brody hunt through an unexplored section of Destiny. Opening the final door, they find a previously unexplored section with several more rooms. The walls are lined with empty stasis pods. Excited, Eli immediately examines a set of controls. Opting for caution, Rush heads for the Bridge, intent on studying the ship's database before touching the newly-discovered equipment.

Annoyed with Rush's decision, Eli returns to the pod room. Brody joins him. From the Bridge, Rush monitors them as they examine one of the chambers and its control mechanism. When Brody steps inside one the door appears to close automatically, trapping him inside. The chamber releases gas and freezes him in stasis. Eli is equally frozen by fear of what he may have accidentally caused ... unaware that Rush is controlling the stasis unit, amused as he teaches the two scientists a lesson.

Volker, meanwhile, visits Lisa. Soon afterward Chloe finds him in the Control Interface Room and, having seen his feelings for Lisa, Chloe wonders if she knows how he feels about her. Nervous, Volker pretends that he and Park are just colleagues and friends. 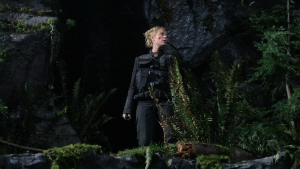 On the planet, an injured T.J. is roused by Reynolds. They have awoken to find themselves in a cave high in the cliff-face overlooking a lush valley. She examines their surroundings. The creature is evidently keeping them to eat later. Since Reynolds has a broken leg, she knows that escape will be impossible. Their only hope is to contact Destiny – but T.J.'s radio is missing and Reynolds' is broken.

Varro and his people arrive on the planet and check the campsite before joining Colonel Young's search team. The lack of blood suggests to them that their missing people are still alive. Tasia, a Lucian Alliance woman, finds partial prints, so they give chase into the thick forest.

As darkness descends, the tracks stop. The creature is nearby, and suddenly ambushes them. After the attack is over Varro stitches up Young's slash wounds, and Greer puts Lt. Vanessa James' shoulder back in its socket. As he sits beside her, she too asks why he froze earlier. Greer confesses that the darkness that enveloped him after surgery has shaken his self-confidence.

Colonel Young hands Varro a weapon before returning to the Stargate. Tasia finds the trail again, and the search continues on through the night. When daylight arrives, the group pauses – aware that the creature is still stalking them. They decide to set an ambush using Lucian Alliance mines. The trap works – in part. In reality there are more than one of the creatures, and while one of them is killed another manages to kill Tasia.

Varro believes they are near the lair now, and he and Greer continue the hunt. 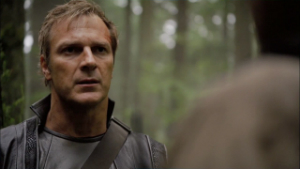 In that lair, T.J. started a fire. Reynolds, determined not to be eaten alive, has fashioned two stout poles into spears. T.J. works on the radio, knowing that only six hours remain before Destiny jumps back to F.T.L. flight.

She finally manages to fix the radio and get a signal out, alerting Greer and Varro to the location of the animal's lair. As the men prepare a C4 diversion, the creature returns to the cave. It studies the weapons T.J. and Reynolds hold. It stares at the fire. Evidently recognizing their intelligence, it backs away just as Greer arrives at the cave's entrance. Now convinced that the creature is intelligent and will allow them to leave, T.J. helps Reynolds outside while Greer stands guard. Greer and the creature study one another face-to-face for a tense moment, before the creature also allows him to leave.

On the way back to the Stargate, Greer does kill one of the deer-like creatures.

Meanwhile, morning has reached Destiny as well. Knowing Eli and Brody spent the night in the stasis-pod room, Rush deliberately chides Eli for not being on duty in the Control Interface Room. Rush heads to the Infirmary, where he finds that Volker has brought Park something to eat.

When Dale finally comes to his duty station, Rush mentions Volker's affection for Park. Volker demurs – but Rush encourages him to act on his feelings. 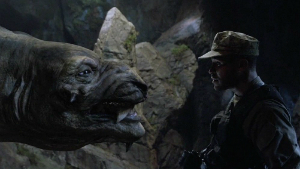 Determined to free Brody from the stasis pod without Rush's help, Eli drags Chloe to Destiny's stasis pod room. As she examines the controls, the door opens and Brody thaws instantly, apparently unharmed and unaware of what has happened. None of them know Rush is manipulating them. When Eli and Brody do return to the Bridge, Rush says that he is now ready to investigate the pods. Not surprisingly, Brody and Eli would rather study the database further.

Summoning his nerve, Volker heads to the Infirmary to speak with Lisa. But when he arrives he finds her sitting with Ronald Greer, listening to his tale with a smile on her face. His heart sinking, Volker turns to leave.

Meanwhile T.J. goes to thank Varro, and Young manages to arrive just as the two are about to kiss. The Colonel breaks them up by sending Varro to help Airman Becker in the Mess, and then silently warns T.J. not to get involved with Varro.

Still, despite the heartbreaks of the day, most of the crew is able to enjoy what is dubbed "Becker's BBQ" later that night.