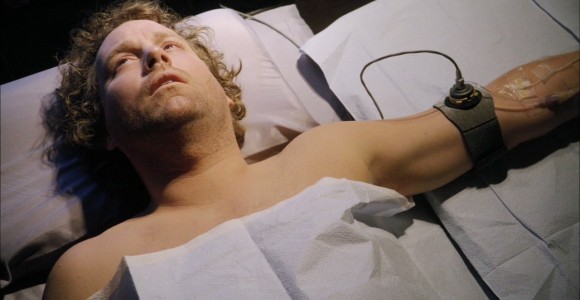 Chloe's body is taken over by the mind of someone the crew believed was dead. Meanwhile, T.J. must perform a dangerous transplant when Dr. Volker is diagnosed with an illness that threatens his life.

In Destiny's Control Interface Room Adam Brody monitors what is happening in the ship's Communications Lab. The communication stones have been attended 24/7 for the past six days. The crew is waiting to learn if Senator Michaels defused the bomb sent to Earth by the Lucian Alliance ("Alliances"). Dr. Dale Volker finishes his shift and stumbles as he walks toward his replacement, Chloe Armstrong. Claiming his leg fell asleep, he joins Brody.

Elsewhere Dr. Nicholas Rush tries to keep Eli Wallace distracted from their situation with a game of chess. The figures are those Rush has carved during the year on Destiny. But Eli is too worried to concentrate. 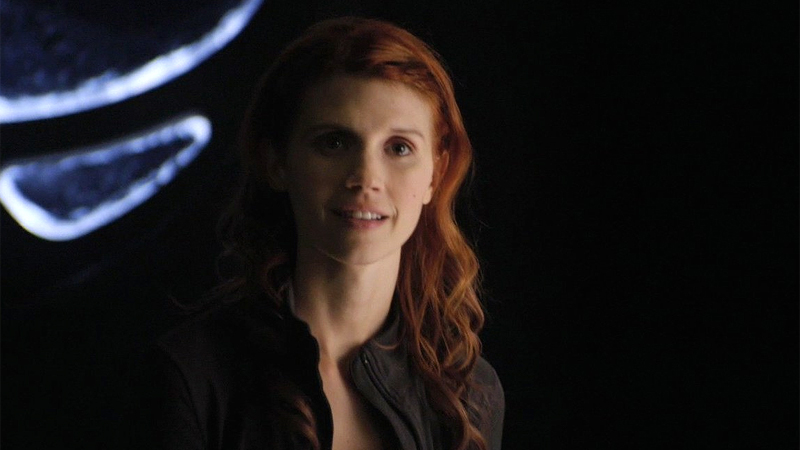 Volker and Brody argue about "Also sprach Zarathustra." The Strauss piece reminds Volker of the time when he first knew he wanted to be an astrophysicist. He pauses, however, looking faint. The moment is lost when Brody notices a change in Chloe. Thinking a connection with Earth finally has been made, he alerts Colonel Everett Young.

Young hurries to the lab and asks who has swapped with Chloe. The woman claims to be not someone from Earth but Ginn, the Lucian Alliance scientist who was murdered by Simeon ("Malice") – and with whom Eli had had a romantic relationship. Young, Rush, and Eli question her and learn that Ginn remembers having trouble breathing while in Amanda Perry's crippled body (using the communication stone technology). She answered questions for Homeworld Security while on Earth in Perry's body. Now she is back on Destiny. Glancing down, she picks up the mirror kept on the table and realizes she is in Chloe's body.

Rush theorizes that because Ginn was murdered while using the stones, the link with Perry was improperly severed. Her consciousness was displaced, floating around disembodied. And now, because Chloe fell asleep while connected to the stone, she relaxed enough for Ginn's consciousness to appear. When Lt. Vanessa James tries to connect to Earth via a second stone nothing happens, proving Chloe isn't linked with anyone there.

Meanwhile, feeling poorly, Volker goes to the Infirmary for sleep medication. With Destiny's medical database now accessible to them, Lt. Tamara Johansen is busy studying the various Ancient medical devices they have on board the ship. As she prepares a sleeping powder to help Volker, he suddenly collapses. 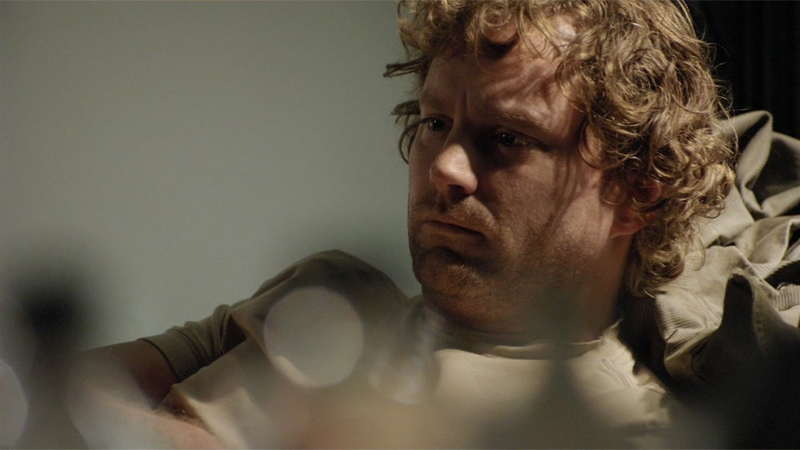 Volker hasn't felt well for over a month, but T.J. never knew of his hypertension. Using the Ancient devices she diagnoses his condition: end-stage renal failure. With dialysis unavailable, the only option is a kidney transplant. Young gives T.J. permission to search for a viable donor ... without which Dale will die.

While Eli catches up Ginn on Simeon's death, and her own funeral and burial, she suddenly can't breathe. The moment passes, but T.J. examines her. There is no physical problem. Rush speculates that Ginn is reliving her strangulation.

Soon after Ginn suffers another choking attack, during which Chloe once again controls her own body – but just for a moment, before passing out. When she awakens, Ginn's consciousness is back. Lt. Matthew Scott checks in with the Communication Lab and learns that during her attack nothing changed with regard to the stone. Rush surmises that Chloe's consciousness has not been sent anywhere but is still inside her head, being suppressed by Ginn's. While Young holds off on ordering the deactivation of Chloe's stone, he tells the crew that he will order it if Ginn suffers another attack.

Not wanting to hurt Chloe, Ginn agrees with Young. Chloe re-asserts herself and asks what is happening. When Ginn returns, she mentions feeling weaker. Eli realizes that Ginn's time is limited: the energy that is her conscious mind is decaying. Rush suggests downloading Ginn's consciousness into Destiny's memory bank, which would preserve her until they find another body for her to occupy.

Meanwhile Dr. Lisa Park, Volker, and Brody are helping T.J. Park creates a translation program which allows T.J. to find information in the Ancient database about organ transplants. Brody figures out how to operate some of the Ancient medical devices. And Volker locates material regarding post-op anti-rejection procedures. But what is needed most is a compatible – and willing – organ donor. 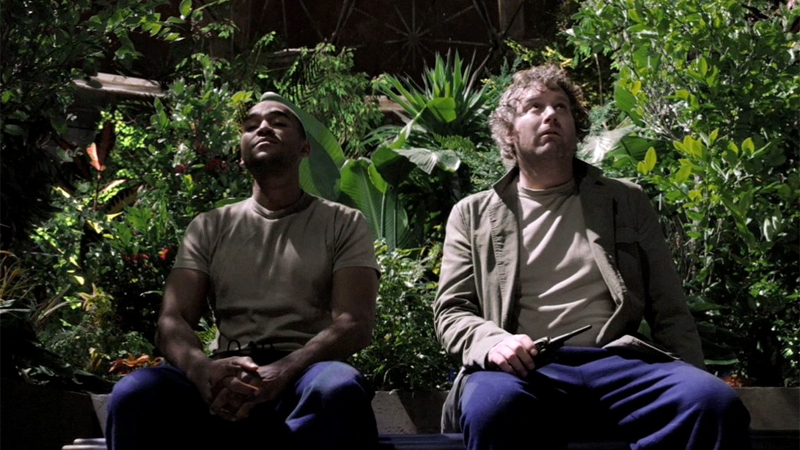 Tests reveal two crew members who are strong matches, one of whom is MSgt. Ronald Greer. While the other (Dr. Morrison) begins defensively asking questions about the possibility, Greer immediately volunteers his kidney without question. Using a procedure Volker discovered, T.J. removes some of Greer's bone marrow as a key first-step in the complicated procedure.

Later, Volker and Greer sit together in the ship's new and flourishing hydroponics dome, commiserating about life and their circumstances.

As Ginn's grasp of Chloe's body weakens, now Amanda Perry emerges in Chloe's body, too. Rush realizes that the neural interface chair may be their only means of saving the disembodied consciousnesses of the two women. To convince the others, he reveals that Dr. Franklin was uploaded into Destiny when he last sat in the Ancient chair ("Sabotage"). While Rush doesn't believe that Chloe will be harmed, Scott insists they ask her permission before beginning the risky procedure. Chloe agrees.

In the Infirmary, Brody uses computer imagery and the medical database to guide T.J. as she removes Greer's kidney.

Eli assures Ginn that just being able to speak to her, hear her will be enough for him – even if she is living inside the ship's computer with no physical body. As she answers him, another choking attack begins. It's now or never. Chloe's body is placed in the Ancient chair. Brain scans show two energy signatures besides Chloe's own. Ginn chokes again, her distress deepening as the transfer begins. A huge power surge rocks Destiny. 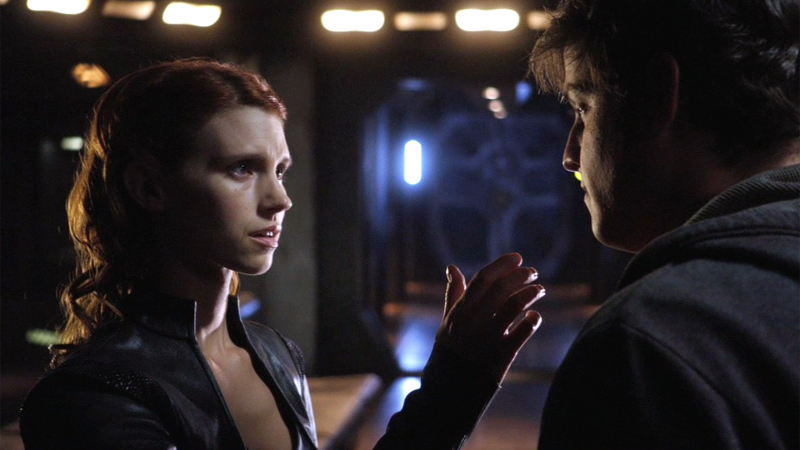 The ship's mainframe becomes inaccessible. Imaging and database access are also lost in the Infirmary, where Volker's surgery is still taking place. T.J. doesn't know how to proceed without help. But slowly, Destiny recovers and returns to normal. Rush switches off the chair and observes that two new "programs" have appeared in the memory bank. One is currently active.

The active program is Dr. Perry, who appears to T.J. Perry now has access to all of the ship's medical data, and guides T.J. through the rest of the surgery. Volker should enjoy a full recovery.

And finally, Colonel David Telford makes a connection from Earth. He tells the crew that the bomb on Earth was safely defused.

When Chloe awakens from the ordeal, she is herself once again. Rush eventually meets Perry on the Bridge, and she thanks him for freeing her. But Ginn is slow to contact Eli. When she does finally appear, she tells him that just being with him is enough. But, as she tries to touch him, her sad expression belies her words.