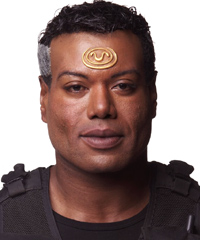 Much of SG-1's knowledge of the Goa'uld comes from the Jaffa Teal'c, a strong and dependable warrior who defected to the Tau'ri after realizing they could be the key to freeing his species from slavery to the Goa'uld. His name means "strength." Teal'c is a Jaffa -- a human used by the Goa'uld as an incubator for infant Goa'uld parasites. Teal'c was not joined with his Goa'uld, but carried one in larval form within his belly. He is more than 100 years old (101 in Season Four's The Light"), and his long service to the Goa'uld has made him knowledgeable of language, enemies, races, technology and more.

Often silent, Teal'c's presence is often stronger without words. A single raise of an eyebrow can make many crumble to their knees. Though it may not always be apparent, Teal'c is frequently amused, and is a passionate man.

He grew up in a society of warriors, strong in the knowledge that if one were weak, one may as well be dead. His father was named Ro'nac, and was First Prime to the System Lord Cronus. Cronus sent Ro'nac into a battle where victory was impossible, and as punishment for losing, Ro'nac's prim'tah was crushed within the symbiote pouch, poisoning Teal'c's father to death. Teal'c and his mother fled to Chulak. Teal'c now bowed to the order of Apophis, and vowed to become the strongest warrior he could so that one day he could ascend to the rank of First Prime of Cronus' sworn enemy.

Teal'c turns his weapon on his fellow Jaffa. From "Children of the Gods"As a young man, Teal'c met the Jaffa master Bra'tac, who was himself the First Prime of Apophis. Bra'tac held the rare and dangerous belief that the Goa'uld are not gods, but parasites who have enslaved the Jaffa. He saw the same doubt in Teal'c's eager eyes. He became Teal'c's mentor, and devoted himself to teaching the young warrior the secrets of the false gods -- and the truth. Having survived the trials, he was admitted into Apophis's personal guard and began to distinguish himself in battle. Bra'tac introduced Apophis to his new subordinate, who blatantly told Teal'c that his father had been a coward, returning from a battle instead of dying for his god. Teal'c disputed the Goa'uld's words, and was punished with the ribbon device at the hand of his new god.

Outside the battlefield Teal'c was successful in developing personal relationships, particularly a romance with a Jaffa woman named Shau'nac, who was forced to end their relationship when she became a temple priestess. He also made friends with a fellow solider named Va'lar. After Va'lar failed to achieve victory against Ra's forces, Apophis ordered Teal'c to execute him. Seeing this as a chance to test his belief that Apophis was not all-seeing and all-knowing, Teal'c freed his friend and returned to Apophis with a symbiote he stole from a nearly-dead Jaffa. Apophis believed that Teal'c had carried out the order, showing Teal'c that his "god" was really no god at all.

Teal'c and his wife, Drey'auc. From "Threshold"Teal'c had taken a wife, Drey'auc, and Apophis had blessed them with a home on Chulak. Drey'auc soon became pregnant with their son, Rya'c. When Bra'tac retired as Apophis's First Prime, Teal'c took his place.

While serving Apophis as First Prime, Teal'c was forced to do many despicable things. He murdered many innocent victims, and selected individuals for Goa'uld implantation. He stood aside, a spectator in a mass murder of culture after culture, forced to bear witness as many a beautiful civilization was raped of its rich life and ideals and initiated into Goa'uld oppression, powerless in helping any of them, for he knew that any aid would do more harm than good. Like Bra'tac before him, he used what little influence he had to make Apophis's will bend from evil.

After Jack O'Neill, Daniel Jackson and Samantha Carter were captured on Chulak, Teal'c saw their presence as an opportunity to spring forth his deep urges to fight actively against the Goa'uld. He accepted Colonel O'Neill's plea for help and turned on his fellow Jaffa, firing on his own men with his staff weapon. He returned to Earth with them, and joined the Tau'ri in their fight against the Goa'uld. Teal'c was branded a shol'vah (traitor) by the Goa'uld, and has since been marked with a high price and hunted by those who would turn him in for profit or other reward. While a few Jaffa follow his and Bra'tac's cause, most shun him for betraying his god.

Teal'c and Bra'tac rescue his son from Apophis. From "Family"Going against his wife's wishes, Teal'c attempted to stop his young son from being given his first larval symbiote, thus enslaving him to the Goa'uld for life. But he arrived too late. But he was reunited with his son, who was told by his mother that he was dead. Rya'c has since grown into a young man, who trains with Master Bra'tac and is eager to become a great warrior like his father. The two were briefly driven apart by the death of Drey'auc, but were able to reconcile.

Drey'auc and Teal'c were, in regards to Chulak marital practices, divorced, but he kept this knowledge to himself, as most everything else. He resumed his romantic relationship with Shau'nac before her murder at the hands of the Goa'uld Tanith, against whom Teal'c swore an oath of revenge that drove him harder against the Goa'uld. And when he encountered a Jaffa warrior named Ishta three years later, Teal'c began a relationship with her.

Teal'c is reunited with his Jaffa master, Bra'tac. From "Threshold"

In addition to seizing his revenge by killing Tanith, Teal'c also successfully avenged his father by helping to kill Cronus.

Apophis eventually captured Teal'c, and for his treachery brainwashed him into believing that everything he had done with the Tau'ri was subterfuge -- he still worshiped Apophis as his god. He resumed his position as First Prime, and fought in battle against SG-1. The team managed to get him back, but it took the dangerous Jaffa Rite of M'al Sharran to break Apophis's hold on his mind. Teal'c was deprived of his symbiote and forced to relive his path, remembering when he realized that the Goa'uld are false gods.

As the efforts of Bra'tac and Teal'c helped the Jaffa resistance movement to grow throughout the galaxy, Teal'c found himself in a key leadership role. He challenged the manipulative Jaffa Kytano for the rite of leadership, and upon killing him, learned that he was actually a Goa'uld named Imhotep. Teal'c became the group's leader.

Teal'c uses his larval Goa'uld to keep both he and Bra'tac alive. From "The Changeling"

Teal'c and Bra'tac later attended a meeting of the Rebel Jaffa tribes on the planet Kresh'ta, only to discover that it was an ambush. One hundred and six Jaffa were slain and deprived of their symbiotes, but Teal'c managed to keep hold of his, and used the single Goa'uld to keep both he and Bra'tac alive for three days. After they were rescued, Teal'c and Bra'tac were forced to rely on the symbiote-derived drug tretonin, as his symbiote was killed by the ordeal. His loss of the strength and health provided by the symbiote caused a crisis of identity for Teal'c, though he has come to remember that a warrior's strength came from his heart, and not his physical body.

Over the years Teal'c has become more talkative and, above all, more assured than ever in his cause.

PLAYED BY: Christopher Judge
FIRST APPEARED: Children of the Gods

SG-1 co-creator Jonathan Glassner recalls casting Teal'c. "We looked at a lot of different ethnicities and mixed races and none of them could act," he said. "We were at the final screen test, we had just seen some tapes on [Christopher Judge] ... We hadn't actually auditioned him yet. And he walked into the room and Brad literally bent over to me and said, 'Please God, let him be able to act.' And he started reading the part and there was a collective sigh of relief in the room."